NT Scholars blurbs about the book (#7) 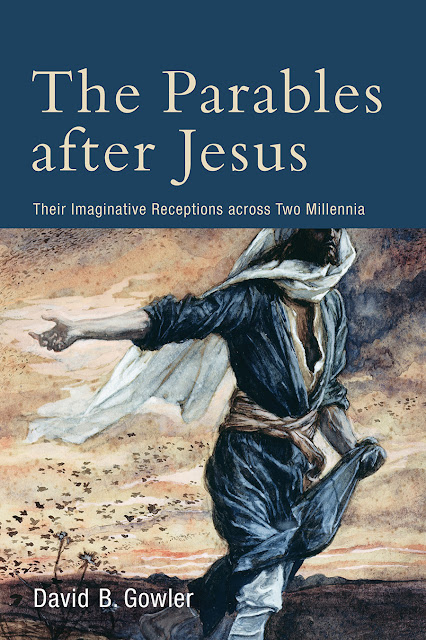 Another endorsement for the book was recently posted on the Baker Academic web page, this one from Dr. Matthew Skinner (Luther Seminary):

If the parables stimulate your mind, feed your soul, upset your values, and occasionally confuse you, you're in good company. Exegetes, poets, hymn writers, allegorists, social reformers, novelists, and painters feature in this brisk tour through two thousand years of parable interpretation, often urging readers to see more in the parables or to view them through a different set of eyes. As a knowledgeable guide through a lively history, David Gowler highlights the evocative interpretations that emerge when a parable encounters a fertile imagination.

As I mentioned in the last post, the author of Luke-Acts gives a dialogic rejoinder to this voice of Jesus:

The dialogic rejoinder of Luke-Acts places more emphasis on directing this prophetic critique primarily to the more fortunate among Luke's readers, in order to warn them and to encourage them to operate within a system of vertical generalized reciprocity.

To accomplish this goal, Luke-Acts incorporates some aspects of the hierarchical Roman imperial system, but it critiques and seeks to transform that system in a radical way. The good news to the poor and the great reversal that the Lukan Jesus offers, however, do not always occur in a timely way. Lazarus lived and died at the rich man's gate and was caught in the exploitative, hierarchical system of the Roman imperial world; the redistribution system from the non-elites to the elites remains in place. Yet the kingdom proclaimed by Jesus, although incorporating elements of that hierarchical system, actually provides a devastating critique: Those higher standards proclaimed by Jesus serve as criteria by which all social systems should be evaluated (cf. Diane Jacobs-Malina, Beyond Patriarchy, 9).

These higher standards include vertical generalized reciprocity, the redistribution from the advantaged to the disadvantaged that expects nothing in return (e.g., Luke 11; 14). They include loving your enemies, doing good to those who hate you, blessing those who curse you, and praying for those who abuse you (Luke 6:27-28). They include turning the other cheek, giving to everyone who begs from you, and being merciful just as God is merciful (Luke 6:29-30, 36). They include not only calling Jesus "Lord, Lord," but also doing what he taught (6:46). These higher standards also include reaching out to people across boundaries of class, ethnicity, gender, culture, sexual orientation, or any other boundaries that human beings erect between themselves. And, finally, they include reaching out to people like Lazarus, who are victims not only of disease, hunger, and poverty, but who also are victims of oppressive systems. The teachings of the Lukan Jesus, these higher standards, lead readers to the realization that although Lazarus ends up in the "bosom of Abraham," he was still caught in a system of oppression. The Lazarus of this parable does not utter a word, but let us give him and others like him a chance to speak. Let us hear his voice, cross those gated boundaries, and see his true plight, as well as the voices and the plights of the other people on the margins, for the Lukan Jesus proclaimed release to such captives, good news for the poor, and announced that the oppressed should go free (see a similar plea in David B. Gowler, "Text, Culture, and Ideology in Luke 7:1-10: A Dialogic Reading," in Fabrics of Discourse, 89-125).

This series on the rich man and Lazarus will continue for quite a while as I explore other dialogic receptions of this parable through the centuries after Jesus uttered it and Luke transmitted his interpretation of it.
at October 01, 2016 No comments: