The Parables after Jesus New Edition 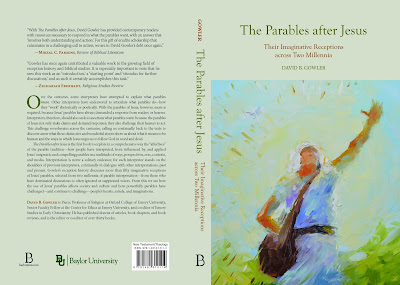 Delighted and honored that the new edition of my book, The Parables after Jesus: Their Imaginative Receptions across Two Millenia, now can be ordered via the publisher, Baylor University Press (and Amazon, etc.).

I am grateful to Cade Jarrell, BUP Managing Editor, the other members of the editorial team, and the University Press Committee for their enthusiastic "reception"of and support for this project. In particular, I am thankful for the excellent work of David Aycock, Jenny Hunt, Kasey McBeth, and Bethany Dickerson that culminated in the publication of this volume. The entire BUP team is truly impressive.

"The Domestication of Jesus's Parables" 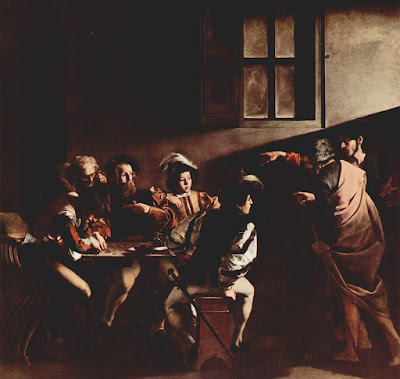 "The Calling of St. Matthew," Caravaggio

Here is part two of my recent article on how the parables of Jesus can be relevant for today: "The Domestication of Jesus's Parables" (Credo Magazine, December 30, 2020). The first part may be found here: “'Go and do Likewise': The Continuing Relevance of Jesus’s Parables” (Credo Magazine, November 13, 2020).

The Domestication of Jesus’s Parables

This is part two of David Gowler’s analysis of Jesus’s parables. Click the link to read part one: “Go and Do Likewise.”

The Domestication of Jesus’s Parables

By far, in my view, the most important and also the most difficult aspect of making Jesus’s parables relevant today is recognizing their prophetic perspective, learning more about the socio-economic situation in the first-century in which Jesus created his parables, and avoiding the all-too-common “domestication” of Jesus’s prophetic message.

In my course, “The Ethics of Jesus,” at Oxford College of Emory University, I have found that the best way for students to grasp major differences between the context of Jesus’s message and their own situations is for them to read Howard Thurman’s classic book, Jesus and the Disinherited, which was first published in 1949.[1]

Thurman correctly argues that the religion of Jesus was born in the context of a people suffering persecution and oppression. Thurman realized that Jesus, a poor first-century Jew, spoke to others who, like him, were poor, oppressed, disinherited and dispossessed—those with their “backs constantly against the wall.” Countless interpreters of the parables over the centuries have recognized the importance of this perspective in the parables of Jesus, including John Chrysostom, Augustine, Ephrem the Syrian, Gregory the Great, Theophylact, Martin Luther, John Calvin, and others.[2]

Some interpreters, however, tend to gloss over the socio-economic contexts of Jesus of Nazareth: Jesus, a first-century, non-elite Jew, was a member of a politically, militarily, and economically oppressed minority. The New Testament Gospels portray Jesus as speaking against the oppressors of his people with prophetic words of judgment that focus extensively on issues of money and power, such as proclaiming good news to the poor and release of the oppressed (Luke 4:16–20) as well as blessings on the poor and woes on the rich (Luke 6:20–26).[3]

Jesus, a poor first-century Jew, spoke to others who, like him, were poor, oppressed, disinherited and dispossessed—those with their “backs constantly against the wall.”CLICK TO TWEETThe parables reinforce this vision of Jesus and his message. The parable of the Sheep and Goats (Matt 25:31–46), for example, argues that giving hospitality to those in need, such as strangers/immigrants (25:35, 43), is the same as giving hospitality to Jesus himself and that God will judge human beings on how they treat the “least of these,” the hungry, thirsty, stranger/immigrant, sick, ill-clothed, and imprisoned. Since some scholars—incorrectly, in my view—interpret the “least of these” as being Christians,[4] it is important to note that the critical importance of these acts of hospitality is found throughout the teachings of Jesus.

Jesus also repeatedly condemns the rich and powerful, declaring that it is difficult for the wealthy to enter the kingdom of God (e.g., as likely as a camel going through an eye of a sewing needle, which is often incorrectly domesticated as denoting a gate in Jerusalem). Parables such as the Rich Man and Lazarus (Luke 16:19–31) and the Rich Fool (Luke 12:16–20) portray how God will condemn those who live lives of conspicuous consumption in the face of human need.[5] In the parable of the Great Dinner (Luke 14:15–24), however, Jesus offers a way for the wealthy and powerful to avoid God’s condemnation: to extend hospitality to “the poor, the crippled, the lame, and the blind.” If such elites would help the poor without expecting anything in return, God would reward them “at the resurrection of the righteous” (e.g., Luke 14:12-14; cf. Matt 19:24//Mark 10:25//Luke 18:25).

Such prophetic parables are more difficult to hear when they are stepping on our toes and not, as we incorrectly assume, only on the toes of others. As we read about the lawyer, priest, Levite, and others involved in Jesus’s parables, it is easy to think, as did the Pharisee in the parable of the Pharisee and the Publican, “God, I thank you that I am not like . . .” those other people (Luke 18:11). Instead, if we allow Jesus’s parables truly to speak to us, we sometimes find that, in the words of Pogo, “We have met the enemy, and he is us.”

The truth is, Jesus told his parables to and about religious people, and there are times we have to admit they are indeed aimed directly at us. As Craig Blomberg notes, for example, there are “frightening parallels” between the rich man in the Rich Man and Lazarus parable and “countless professing Christians” today.[6]

Responding to Jesus and His Parables

If we allow Jesus’s parables to speak to us, we sometimes find that, in the words of Pogo, “We have met the enemy, and he is us.” Jesus told his parables to and about religious people, and there are times they are aimed at us.CLICK TO TWEETHoward Thurman is correct, I believe, when he concludes that an existential encounter with the teachings of Jesus must lead to concrete action in the world, including a profound moral obligation to reflect, decide, and act accordingly with the poor, oppressed, and disinherited of our own era. The inner, personal, spiritual transformation of individual human beings should create a community of faith that is dedicated to and active in personal and social transformations based on the teachings of Jesus and in response to the human need that surrounds them.

The parables of Jesus cohere with his other teachings about the love of God and neighbor. Jesus assures his hearers, then and now, that God is good and that God loves us, cares for us, and showers us with good things (e.g., “look at the birds of the air;” “consider the lilies of the field”; Matt 6:25–33). Included in that message is the call not to worry, because God takes care of us now and will continue to take care of us, and, in our response of faith to God’s love, God commands us to treat other human beings as God has treated us: with love, compassion, and by working actively for their well-being.

When Jesus tells the lawyer—and all others who truly hear his parables—to “Go and do likewise” (Luke 10:37), he not only is telling us to be like the Good Samaritan; he is also telling us to become like the loving father in the Prodigal Son parable and like the “sheep” in the story of the Sheep and Goats who take care of the “least of these”—to be as loving, kind, forgiving, and generous to other human beings as God has been to us.

Jesus said, “Go and do likewise.”

That message, especially in troubled times, will always be relevant.

[1] Howard Thurman, Jesus and the Disinherited (Boston, MA: Beacon Press, 1949). The book served as an inspiration for many civil rights leaders, such as Martin Luther King, Jr. See also Howard Thurman, Sermons on the Parables, edited and introduced by David B. Gowler and Kipton E. Jensen (Maryknoll, NY: Orbis Books, 2018).

[2] Detailed extensively in Gowler, Parables of Jesus. Cf. Charles Haddon Spurgeon’s view of evangelic faith and social action, which is similar to Thurman’s view of how individual Christian’s faith leads to social/moral responsibilities (see below).

[4] For a nuanced discussion that correctly concludes that “least of these” means all “the unfortunates of the world,” see Arland J. Hultgren, The Parables of Jesus (Grand Rapids, MI: Eerdmans, 2000), 309–30.