What are They saying about the Parables? (revised new content in Chapter 4 ): The Parables of Jesus in/and the Gospels: The Dialogues Continue (Part 3) 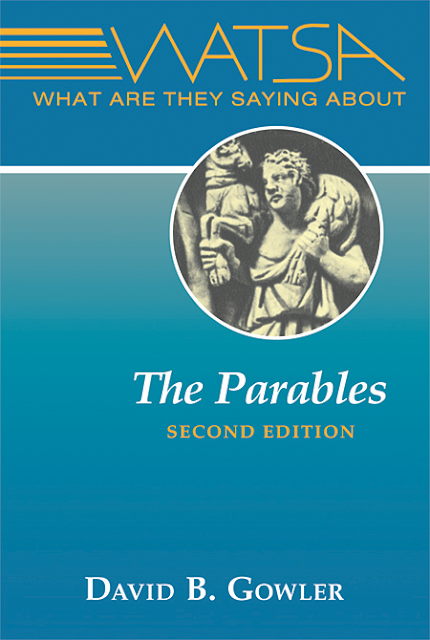 Chapter 4 (part 3): Authenticating the Synoptic Parables as Parables of the Historical Jesus

The conclusion that the parabolic tradition contains bedrock authentic sayings of Jesus has been foundational in New Testament scholarship. Even historical Jesus scholars less confident in the authenticity of Jesus traditions accepted the basic authenticity of the parables in their reconstructions of the teachings of Jesus. The Jesus Seminar, for example, agreed that Jesus primarily taught in aphorisms and parables, that parables were distinctive creations of Jesus, and, as a result, have “certain distinguishing marks.” In the end, members of the Seminar voted for the basic authenticity of twenty-one of the thirty-three parables on which they deliberated (see my WATSA Historical Jesus? for details).
In his fifth volume in his series of books entitled, A Marginal Jew: Rethinking the Historical Jesus, John P. Meier challenges the consensus that scholars should use the Synoptic parables as foundational elements of the Jesus tradition to reconstruct the teachings of the historical Jesus. For Meier, historical Jesus means “the Jesus whom we can recover, recapture, or reconstruct by using the scientific tools of modern historical research” (I:1). These “criteria of authenticity” include the criteria of embarrassment, discontinuity (dissimilarity), multiple attestation, coherence, and rejection and execution. Other secondary criteria, such as traces of Aramaic, Palestinian environment, and vividness of narrative, are much more problematic and should only be used to reinforce impressions gained from the five primary criteria.
Meier’s views on the parables’ authenticity changed over the course of writing these volumes. In his first volume, he concludes that parables play a significant role in Jesus’ proclamation of the kingdom, and, in his second volume, Meier is confident in the parables’ basic authenticity: “That parables were a privileged form of Jesus’ teaching is a fact accepted by almost all questers for the historical Jesus...The abundance of parables in the Synoptic tradition, distributed among all the sources, plus the absence of equally deft, artistic parables elsewhere in the NT, argues well for the origin of many—though not all—of the Gospel parables in Jesus’ teaching” (II:145). Meier argues that Jesus’ powerful preaching and teaching, especially the riddle-like parables, confronted his listeners with a kingdom of God that challenged their present ways of thinking and living. Through the parables, people experienced the kingdom as present in their everyday lives (II:1043).
Meier offers a much different perspective on the parables in his fifth volume, where he challenges the “free pass” most scholarship gives the authenticity of the parables (xii). A crucial factor for Meier’s conclusions about the authenticity of the parables is his decision that the Gospel of Thomas does not represent an earlier, independent tradition of Jesus’ parables (44–47). This elimination of the Gospel of Thomas as an independent witness is devastating to Meier’s ability to demonstrate the authenticity of Jesus’ parables because of the importance of the criterion of multiple attestation to his approach (e.g., no parable found only in Matthew, Mark, or Luke can meet the criterion of multiple attestation).
In the fifth volume, subtitled Probing the Authenticity of the Parables, Meier argues that relatively few parables attributed to Jesus in the Synoptic Gospels can be authenticated with a good degree of probability (48). In fact, after applying “thorough testing,” Meier concludes that only four parables can be determined to derive from the historical Jesus: Mustard Seed (Mark 4:30–32; Matt 13:31–32; Luke 13:18–19; Thomas 20), Wicked/Evil Tenants (Mark 12:1–11; Matt 21:33–43; Luke 20:9–18; Thomas 65), Talents/Pounds (Matt 25:14–30; Luke 19:12–27), and Great Supper (Matt 22:2–14; Luke 14:16–24; Thomas 64).
Only the parable of the Mustard Seed is clearly attested in multiple independent sources (The “Mark-Q overlap”), and it also passes the criterion of coherence, since it “fits perfectly with the eschatological message” of the prophet Jesus (239–40). The criterion of embarrassment suggests the authenticity of the Wicked Tenants (210). The cases of the Great Supper and the Talents/Pounds are more “muddled” (253), but Meier judges them to be created by Jesus because, in his view, they are not from the source Q shared by Matthew and Luke; instead they are multiply attested in the independent sources M and L (278).
Meier notes that just because a parable cannot be determined as authentic by his criteria does not necessarily mean that it was not created by the historical Jesus. Since Meier, however, does not use those words and deeds he considers to be non liquet (not clear either way) to reconstruct his historical Jesus, his conclusion that just four parables can be definitively attributed to Jesus leads him to decide that parables can play only a marginal role in reconstructing the message of Jesus of Nazareth.
Like other historical-critical approaches, Meier’s methodology cannot overcome the inherent limitations of the criteria of authenticity. Meier is especially dependent on the criterion of multiple attestation, so the decisions scholars make about source theories (e.g., Markan priority) determine in which direction a long line of dominos of (in)authenticity fall. Can multiple attestation, dissimilarity, and other criteria of authenticity give us adequate reconstructions of Jesus? Even Meier admits that the application of these criteria is “more art than science” (V:19), and, as Steve Bryan notes, many of Meier’s historical judgments could “easily go the other way.”
Ironically, one impact of Meier’s A Marginal View series is to illustrate the limitations of the historical methods he employs, and to shift more attention to scholars who rely on other approaches, such as ones who incorporate contemporary cognitive studies of memory (e.g., Dale Allison’s “communal memory”). Some recent parable studies have followed this path, as illustrated, for example, in the work of Ruben Zimmermann, whose work I will discuss in the next post.
at June 28, 2021 No comments:


My thanks to Dr. Mark Vitalis Hoffman of United Lutheran Seminary for sending me this reception history of the parables website from one of his students, Evan Christensen.
Evan created the website for one of the assignments in the parables class that he took with Dr. Vitalis Hoffman. In that class, students select a parable on which to focus, and one of the assignments is to provide a “re-presentation” of receptions relating to or interacting with the parable.
Evan chose the Rich Man and Lazarus parable (Luke 16.19–31) and created this virtual museum of media artefacts that effectively presents differing receptions of the parable from which we can learn. Check it out here.
I am grateful for Evan’s excellent work. I love his inclusion, for example, of the Golden Gospels of Echternach, James Janknegt, Martin Luther King, Jr. (“The Impassible Gulf” sermon), Nigel Lawrence, Jose Arana (Solentiname), Laura Jeanne Grimes, Johnny Cash’s version of “Hurt,” and many others (I’m still pondering David Bowie’s music video, “Lazarus”).
Take a look for yourself. There are many ways to talk about the importance of this type of work that Evan does here and how much we can learn from it. Four of the ways I have mentioned already on this blog include:
Reception history like that encouraged by Dr. Vitalis Hoffman and accomplished by Evan Christensen helps to overcome these shortcomings and to remove exegetical blinders from interpreters, especially when such diverse voices from various perspectives are included in the conversations.
Congratulations to Evan for his great work--I learned a lot from it--and best wishes for his future endeavors!
at June 14, 2021 No comments: 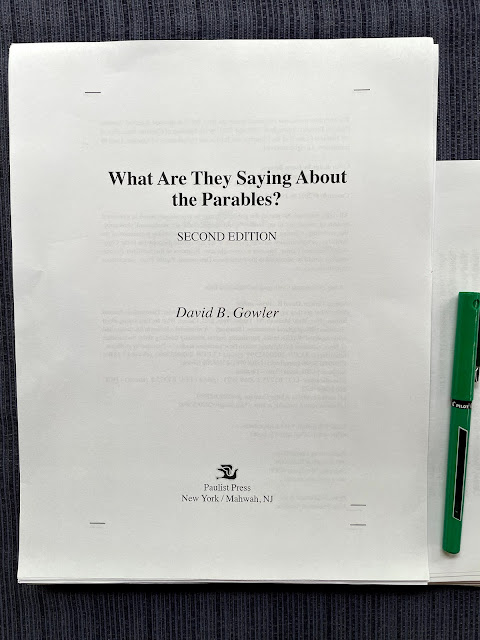 Delighted to have received the initial page proofs for the revised and expanded second edition of What Are They Saying About the Parables? The volume will appear this fall, at least before the annual meeting of Society of Biblical Literature in November.
After corrections are made in the initial proofs, I will then receive a copy of the final page proofs and create the indices. The first volume only had a Scripture Index, but it's clear that I need to add a Index of Names to the volume as well, because there are a large number of additional scholars whom I discuss/cite in this volume.
I have a couple other posts to do before I resume the summary of the chapters of this new edition.
at June 03, 2021 No comments: