Review of my book (part 3) by Nijay Gupta

Here's the final part of Nijay Gupta's review of The Parables after Jesus.

I am grateful for his careful reading and thoughtful critique.

He raises a valid point at the end, one which readers of this blog may remember (since I catalogued the decisions I made and why while writing the book) that I debated and struggled with many times.

For the reasons that I will recount in full here (e.g., of the ~40,000 words of painful cuts I had to make, such as deleting all of what I wrote about Bede and Chaucer), I decided to do most of the "synthesis" work in the various sections themselves (e.g., the allegorical interpretations in contrast the less allegorical in the early Church) and also to limit myself to one lengthy example of such a "synthesis" in one parable (the Prodigal Son in the Introduction) as an example of what others could do to build upon my work in this book.

My own inclination is to celebrate heteroglossia and to react against what often is an over-simplification of eras or trends in eras (e.g., such as in the proposed stages of the quest of the historical Jesus), so that also probably played a role in my decisions.

Let me hasten to add that Nijay clearly is not asking for that; I'm just saying that such concerns (and biases) were part of my rationale for not doing more of the synthesis for which he (rightly) seeks.

The last main chapter focuses on both the 20th and 21st centuries (pp. 207-153). Here Gowler covers 9 people/groups including Thomas Hart Benton, the Blues, Flannery O’Connor, Martin Luther King Jr., Godspell, Latin American interest in the parables, David Flusser, Octavia Butler, and Thich Nhat Hanh. I will mention a few interpreters that were especially interesting to me. I love Flannery O’Connor. Her novel, The Violent Bear It Away, is considered to be inspired by the Parable of the Sower, a harrowing but vivid modern tale. As for Martin Luther King, he preached with passion about the Parable of the Rich man and his storehouses. Also, unsurprisingly, King was inspired by the Parable of the Good Samaritan. My favorite musical of all time is Godspell and as a young Christian I learned many of the teachings of Jesus through it. Gowler is no doubt right when he says that Godspellmore than any other Jesus film/play/musical “incorporates parables so deeply into its narrative of Jesus’ life and teachings” (232).
Conclusion
Gowler’s conclusion is concise, less than three pages. He simply affirms that we see such creativity and  rainbow of readings of the parables no doubt because they are puzzles and riddles worth pondering extensively. Gowler likens them to art works, inviting the reader into active imagination.
Gupta’s Final Thoughts
Gowler’s The Parables after Jesus is such a fun book to read – the case studies are well-chosen and refreshingly diverse. Gowler balances ancient and modern, East along with West, men and women, academic and art/popular culture. The visuals in the book are helpful and show the impact of the parables even in earliest Christian art. If I have one lingering desire after completing the book, though, it is for more synthesis and guidance from Gowler. I would have enjoyed some commentary on trends and distinctives of certain periods or communities, perhaps briefly at the end of each chapter. In the conclusion, Gowler could have adumbrated how readings have flowed through various watershed moments. These ideas notwithstanding, I warmly recommend this book to all students of the Gospels and the parables of Jesus.
at July 22, 2017 No comments:

"The Rich Epicure and Poor Lazarus" by Jose Arana Included in Evan Christensen's "Virtual Museum" My thanks to Dr.... 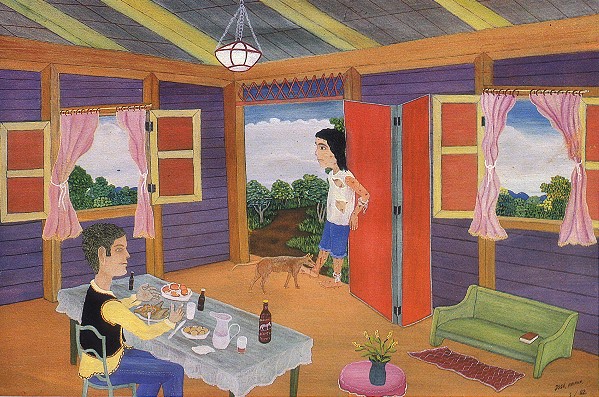