First response to forthcoming book on Howard Thurman and the Parables 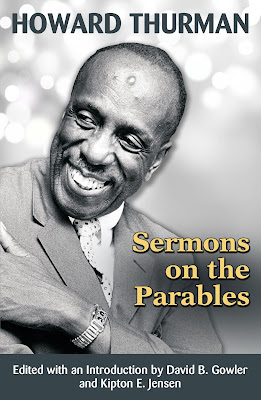 The book that Kipton Jensen and I introduced and edited, Sermons of the Parables, by Howard Thurman (above), won't be available until August, but we received word from Orbis Books that the first review blurb for the back cover was submitted.

The blurb was written by Dr. Walter Fluker, the Martin Luther King, Jr. Professor of Ethical Leadership at Boston University School of Theology and the Editor and Director of The Howard Thurman Papers Project.

Here is what Dr. Fluker wrote about the book:

Sermons on the Parables is a rare gem, a distillation of the creative and intimate connections between the parables of Jesus and the spirit of a master storyteller and spiritual virtuoso, Howard Thurman.  The themes found in Thurman’s  lively imagination are rich and riveting; and they call us back to the primacy of religious experience and ethical accountability.

I am honored to be associated with this project. Hopefully even more people will become aware of Dr. Thurman's significant contributions.

Cover of New Howard Thurman Book on Parables of Jesus

So proud and honored to be associated with this project and with Orbis Books (who asks me to remind everyone that the book will appear in August, 2018, and that you cannot order it yet). 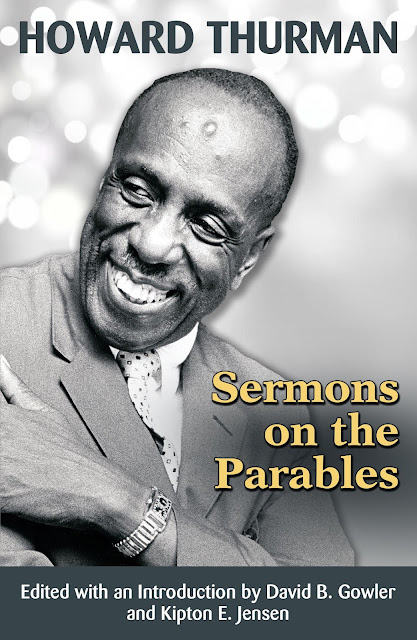 Thurman is such an impressive human being. I used his book, Jesus and the Disinherited, this semester in my Ethics of Jesus course, and the book still really speaks to students ~70 years later.

My thanks also to Kipton Jensen, my co-editor. The project was his idea, and it became a labor of love for us.

I will soon return to the topic of Roger Williams, religious liberty, the separation of church and state, and the parable of the wheat and tares in future posts, but I wanted to give an update on our (= Kipton Jensen and me) forthcoming book with Orbis Books: Howard Thurman: Sermons on the Parables.

Orbis is not taking orders yet on this book; it's not even available on Amazon to pre-order yet--although The Parables After Jesus is!--but it will be published in August.

Kipton and I sent corrected proofs back to Orbis a couple weeks ago: 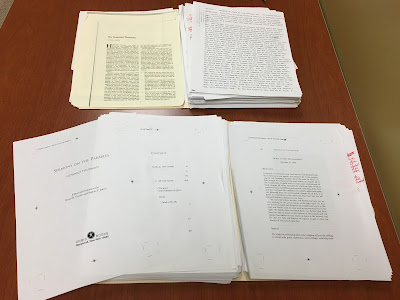 Later today I will try to post a photo of the proposed cover, but here is the manuscript (proof-stage) title page. 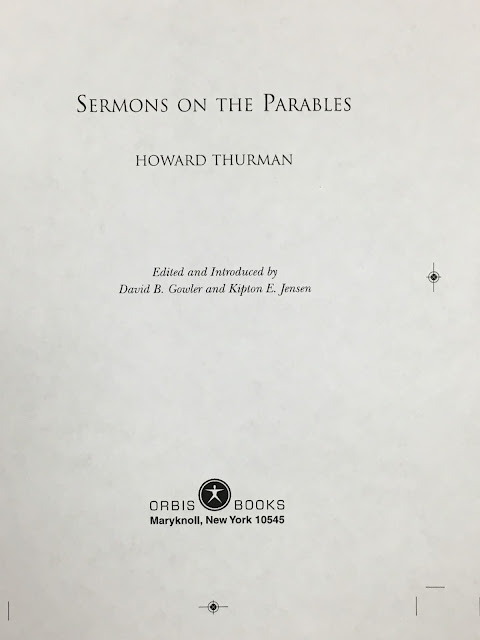 Roger Williams, Religious Liberty, and the Wheat and Tares Parable (I)

“The Governor shall annually proclaim the last Wednesday in September as A Day of Prayer for Kentucky's Students and shall call upon the citizens of the state, in accordance with their own faith and consciences, to pray, meditate, or otherwise reflect upon the students of this state as well as their teachers, administrators, and schools.”
Kentucky General Assembly House Bill 40

Debates about religious liberty, separation of church and state, prayers in public schools, and the government proclaiming "Days of Prayer" are recurring, including bills introduced in various state houses about "sharia law" and "Days of Prayer" for a number of different reasons.

Such debates almost always begin with citing Thomas Jefferson's letter to the Danbury Baptist Association, so I thought it would be good to revisit this issue and explain again that the "wall of separation" language was first used in colonial America by the minister Roger Williams, and he use the parable of the wheat and tares (wheat and weeds) to argue his case.

A common misperception is that it is against the law to pray in school or that saying “Merry Christmas” in school is another casualty in the supposed “War on Christmas.” Neither is true. As the old saying goes, “as long as there are math tests, there will be prayer in schools.” Private, nonintrusive expressions of religion are protected under the First Amendment, so students can pray or meditate in private at any time.

The 1962 Supreme Court Engel v. Vitale 8-1 decision found that school-sponsored prayer violates the Establishment Clause of the First Amendment (“Congress shall make no law respecting an establishment of religion, or prohibiting the free exercise thereof . . .) means that students can pray in school anytime they want individually or in groups (a “free exercise of religion”), as long as they do so voluntarily and without disrupting others, but prayers in public schools must not be state sanctioned, sponsored, or mandated (“an establishment of religion”). As Valerie Strauss notes in The Washington Post’s “Answer Sheet”:

Schools are forbidden from initiating or sponsoring religious activities, including prayer, but religious groups are permitted to meet on school grounds after school, and students can pray to whatever or whomever they want at any time of day, as long as they do it privately and don’t try to force others to do the same. Religion can (and should) be a class subject — but not proselytized — in public schools, sacred music can be played in schools under certain circumstances, and schools can’t bar teachers or students from saying “Merry Christmas” to each other.

In 1976, Kentucky enacted a law sanctioning a specific prayer in schools—a “voluntary” reciting of “the traditional Lord’s Prayer” that it claims (unironically) is a history lesson about “the freedom of religion symbolized by the recitation of the Lord’s Prayer.” The bill recently passed by the Kentucky House, though (see above), is less controversial since it does not sanction prayer by students in public schools; it instead would mandate a state day of prayer for schools, students, teachers, and administrators.

In debates about school-sponsored prayer and religious liberty, the most often cited historical reference is Thomas Jefferson’s famous “building a wall of separation between church and state” declaration in his 1802 letter to the Danbury Baptists.

Three notable things, however, are often overlooked about that letter, and I will turn to those three things in my next post (it will include the Roger Williams's reception of the wheat and tares parable).
at April 11, 2018 No comments: