Ely Cathedral and the Parables (#2)

This post is about two stained-glass windows in Ely Cathedral that are not too far from Bishop Alcock's Chapel that I mentioned in my previous post (the Northeast corner at the front of the cathedral).

Here is a look at the entirety of the first window (this is the best picture my iPhone would take). This window is in memory of Eliza Fardell (d. 1861), the wife of Canon H. Fardell. The window illustrates three parables and one miracle (the two windows previous to this one illustrate several miracles): 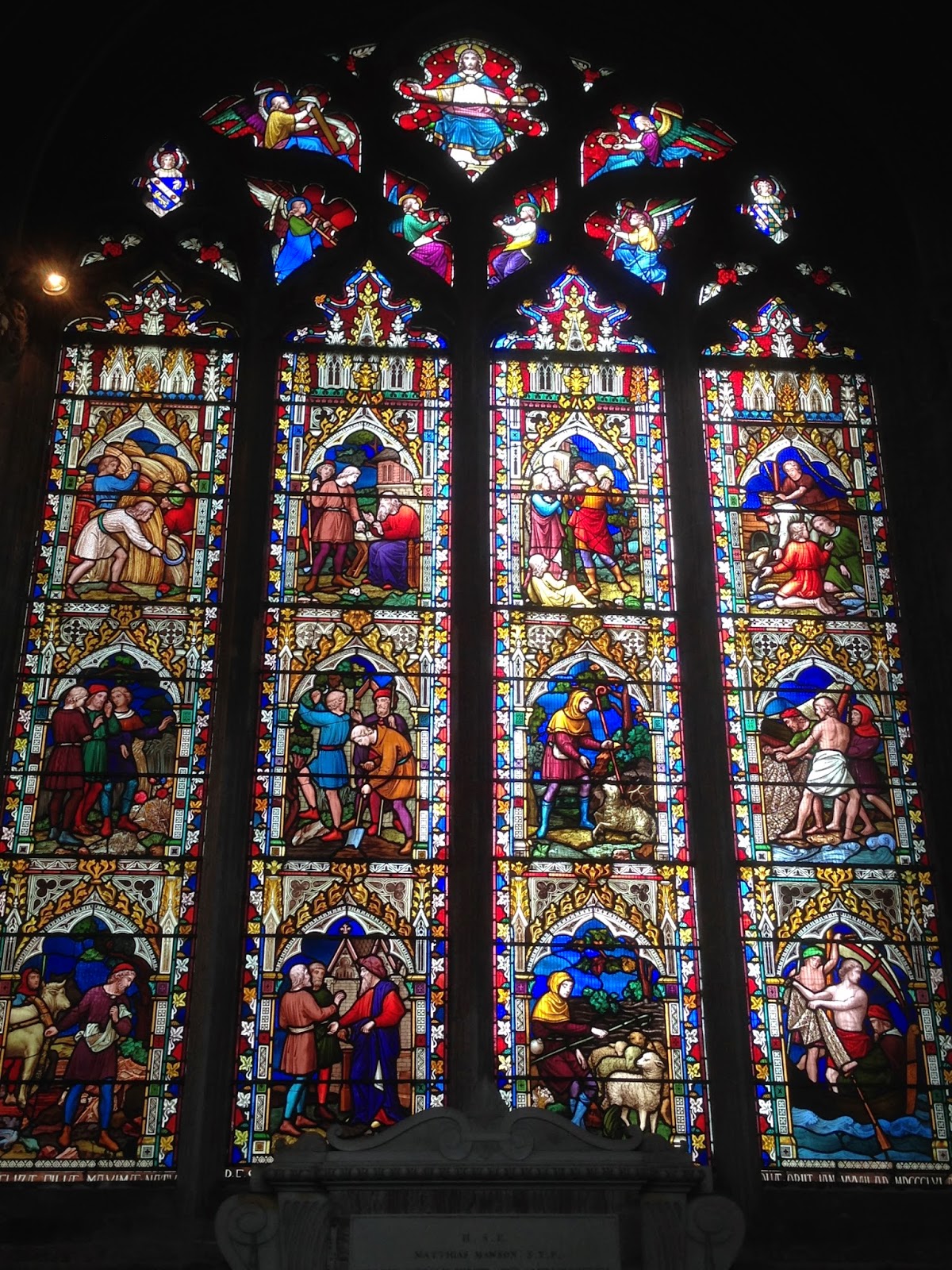 The photo below shows the two stories on the left side of the window. The left side portrays the parable of the Wheat and the Tares. The story starts from the bottom and shows the seeds being sown. The man in the background looks at the viewers as if to invite them into the story. The next scene up shows the deliberation over what to do with the tares, and it is decided that the separation should wait until the harvest. The harvest (i.e., the Last Judgment) is then portrayed in the top scene.

The parable of the Workers of the Vineyard is portrayed next, with the man hiring two workers in the first scene (at the bottom). The workers are then shown working at their tasks (e.g., digging), and the final scene at the top shows the owner of the vineyard explaining that it is his decision what to pay each worker: 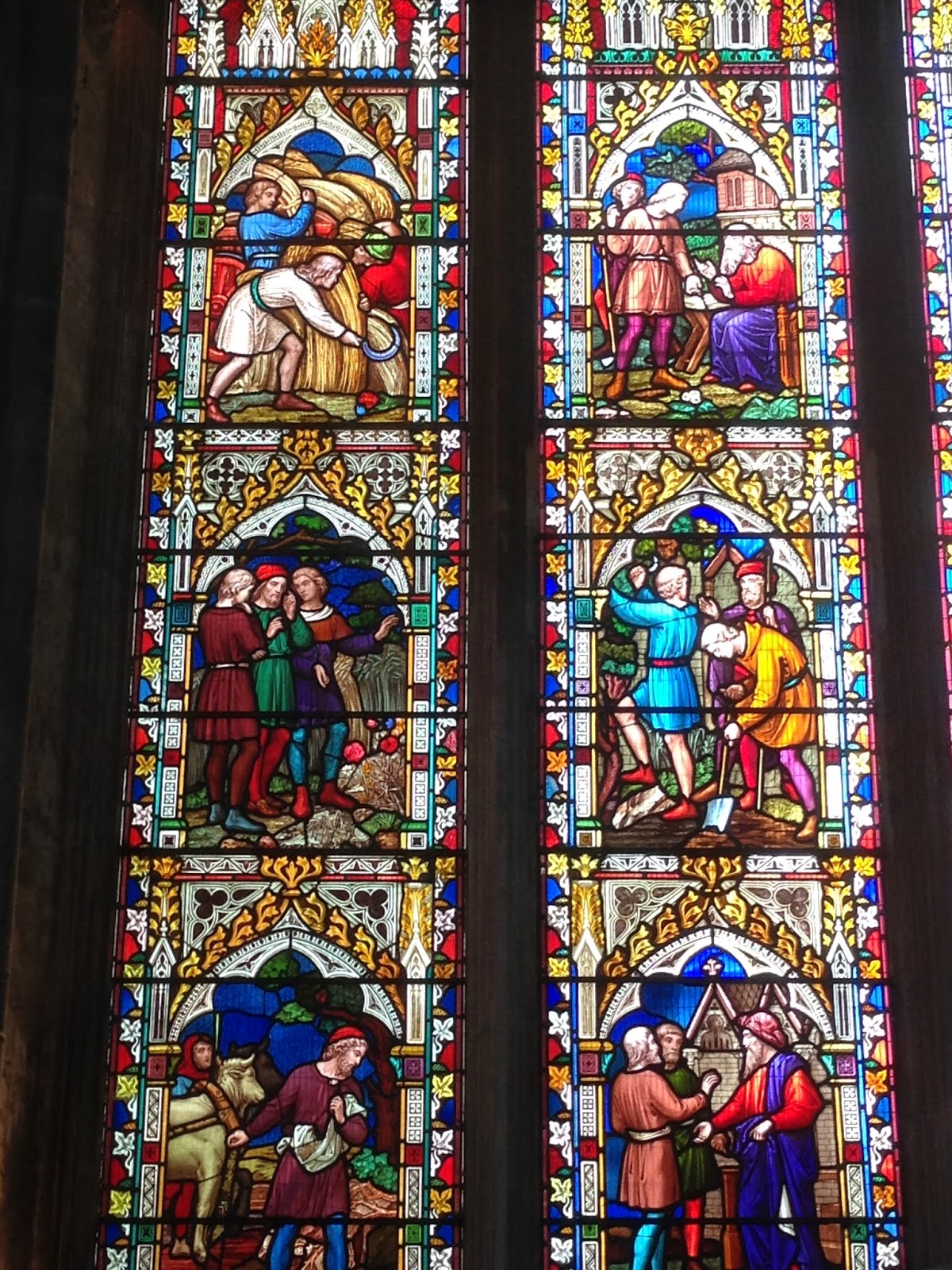 The other side of the window starts with the parable of the Lost Sheep in Luke 15. The first shows the shepherd taking care of the sheep, and the second shows him finding the one lost sheep. The third and final scene shows him carrying the sheep back (in the classic Greco-Roman image of the ram bearer (Greek kriophoros; κριοφόρος; see my posts on "The Good Shepherd in Early Christian Art" from January 2014). Other people are included in this scene to demonstrate that a celebration over the recovery of the lost sheep is about to begin.

The right side of the window shows the miracle of the miraculous draught of fish (most likely the Lukan version of the story). Peter throws out the net; they pull the net in; the huge catch of fish is shown: 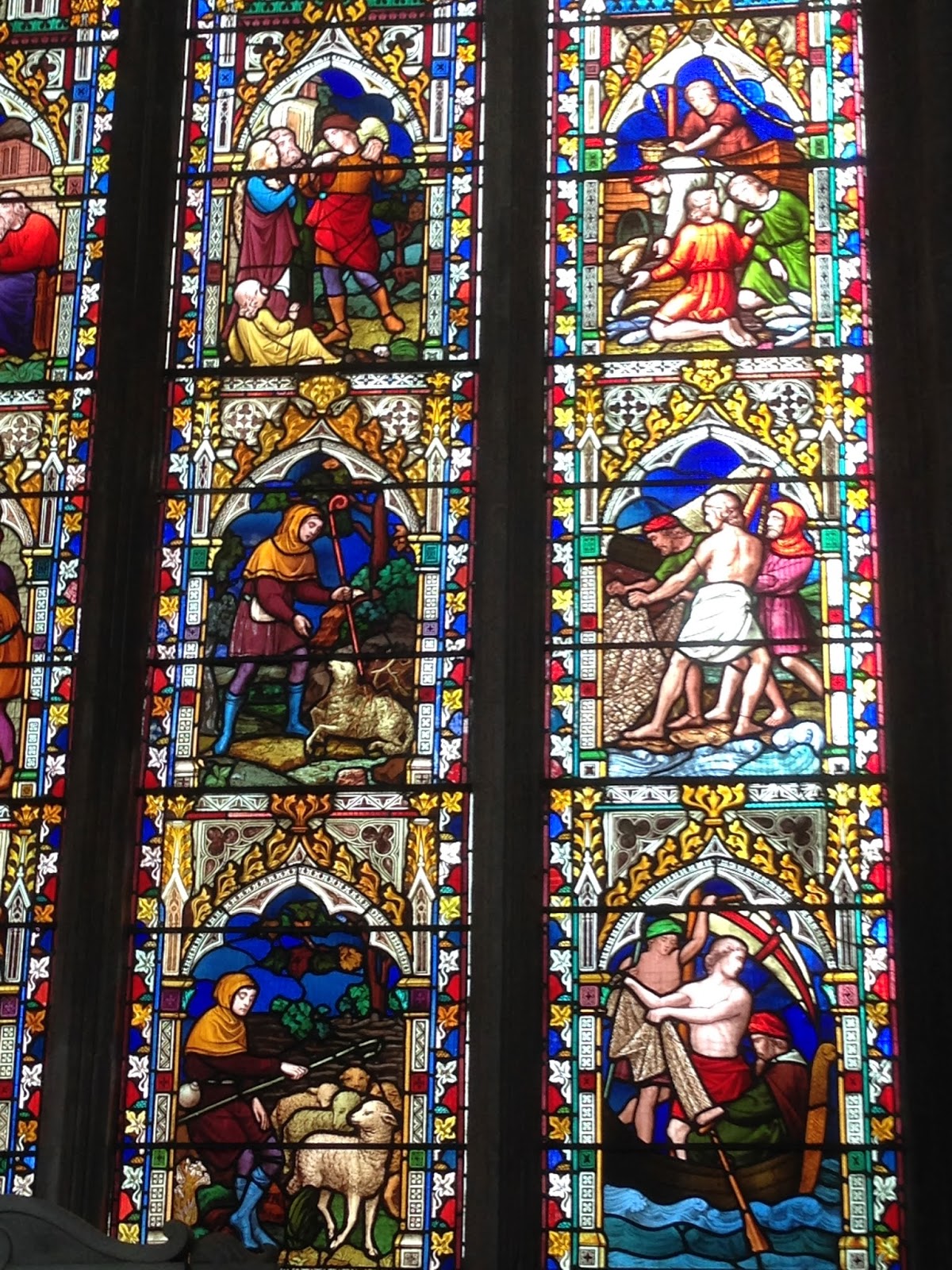 The next window is a memorial to Canon Fardell (d. 1864). It shows the parable of the Ten Virgins (Matthew 25:1-12) on the left and then examples of ministry to those in need mentioned in the Sheep and Goats parable (Matthew 25:31-46). 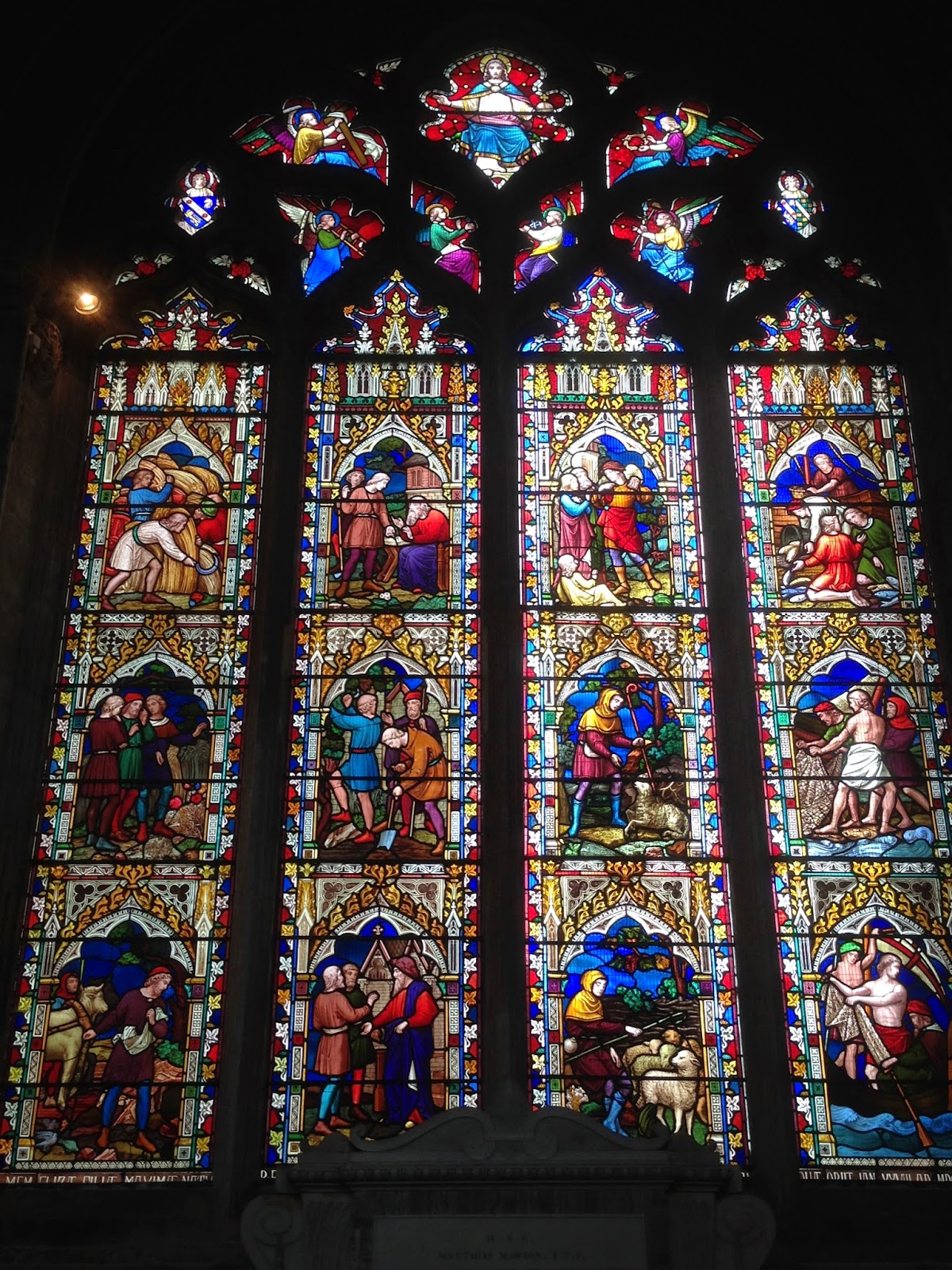 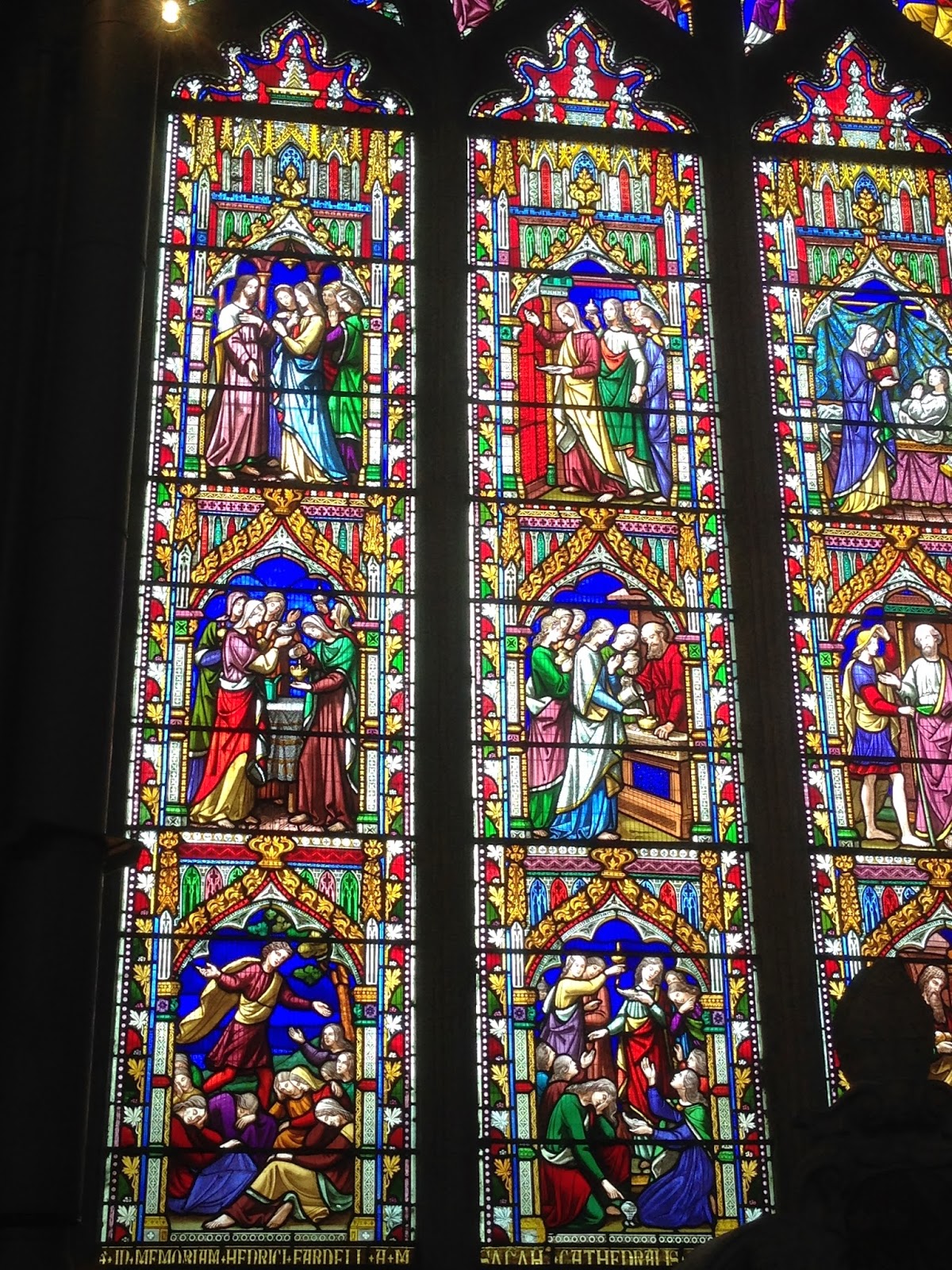 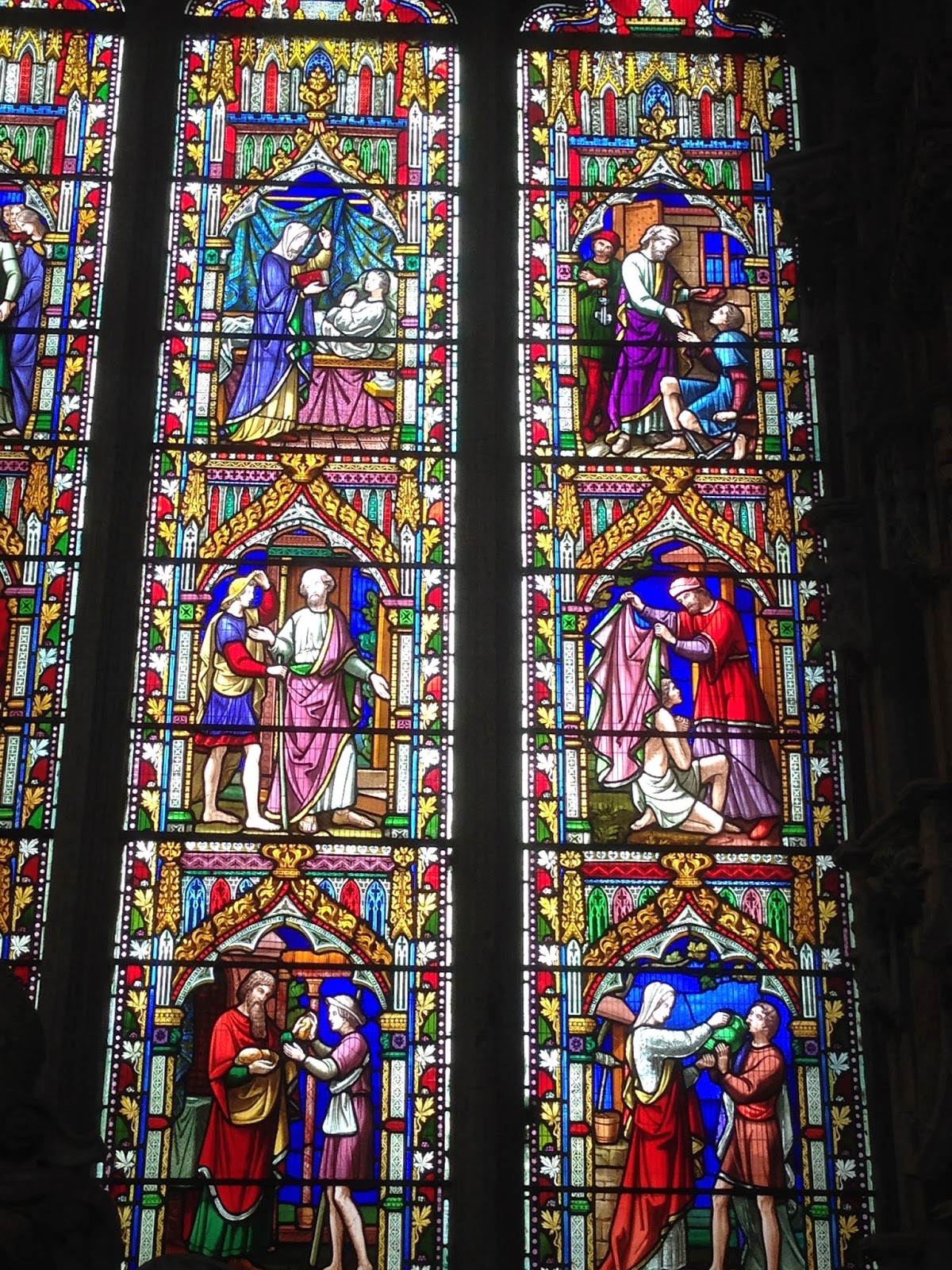 Although I have photos of one more window from Ely Cathedral, I will wait to discuss that one in my next post. The message of Matt 25:35-36 seems like the best place to end this post: how we are supposed to treat other human beings in need.