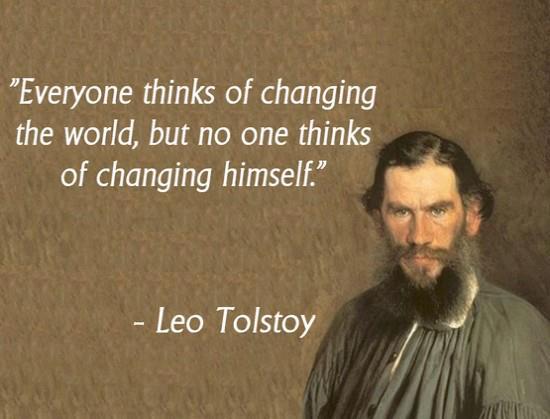 One of the best examples of Leo Tolstoy’s view of Christian morality is found in his 1885 short story, “Where Love is, God is.” It is a poignant and somewhat sentimental story, but it gets to the heart of Jesus’ teachings, most notably focusing on what the parable of the Sheep and Goats teaches about human relationships and the will of God.

Tolstoy, the author of classic novels such as War and Peace and Anna Karenina, was born in a Russian aristocratic family on August 28, 1828, at Yasnaya Polyana, his family’s estate about 120 miles south of Moscow. Tolstoy’s mother died when he was two years old, and his father died just seven years later. Both deaths were devastating losses that affected Tolstoy for the rest of his life.

Tolstoy attended Kazan University but dropped out when he inherited the family’s estate in 1847. He lived a rather dissolute life—parts of the estate, for example, were sold to pay his gambling debts—and suffered from an often overpowering guilt, because he could not live according the “Rules for Life” that he composed for himself (Tolstoy 2006: 15-16). He joined the army in 1851, following in the footsteps of his brother Nikolai, and his first published novel, Childhood, appeared in the magazine, The Contemporary, where it gained the favorable attention of other Russian authors, such as Fyodor Dostoevsky and Ivan Turgenov.

Tolstoy became more famous after he published several other works during the five years he served in the army—his fans included Tsar Alexander II. Tolstoy also reflected on religious issues, became an ardent pacifist, and even contemplated starting a new religion based on “the religion of Christ, but purged of dogma and mystery, a practical religion, not promising future bliss but providing bliss on earth” (Bartlett 2010: 113).

Tolstoy left the army in 1856, traveled extensively, moved back to Yasnaya Polyana, and then married Sofya Behrs in 1862. He worked on War and Peace for over five years, which was published in 1869, and wrote Anna Karenina from 1873-1878, a book he never liked (Tolstoy 2006: 23). A spiritual crisis led him to re-evaluate his religious beliefs, and in his 1882 A Confession, he concluded that God did indeed exist. This work represents a shift in Tolstoy’s writings; the novelist developed into a moralist, prophet, and evangelist preaching the ethics of Jesus.

Tolstoy’s The Kingdom of God is within You argues that non-resistance to evil as espoused by Jesus in the Sermon on the Mount is the foundation upon which humanity must build its house (citing the House built on the Rock parable; Matt. 7:24-27). He admits that only a small number of Jesus’ followers actually had followed Jesus’ teachings on non-violence, a “corruption” of Christianity that had brought untold destruction over the intervening centuries (Tolstoy 1894: 185-86).

Tolstoy’s understanding of Christianity was unorthodox, and he was excommunicated from the Orthodox Church in 1901 after his book, Resurrection, harshly criticized the church. He refused to accept traditional Christian doctrines, such as the Virgin Birth, Incarnation, Atonement, Resurrection, or the Trinity. Tolstoy’s Christianity focused on the Love Commandment (Matt. 22:37-39), the Golden Rule, and social action based on the Sermon on the Mount that would lead to the elimination of evil society and the establishment of the kingdom of God on earth. Christianity, he argues, is not about worship of God or doctrines; it is instead a way of life based on the teachings of Jesus that changes the whole structure of society.


Tolstoy’s views on the Sermon on the Mount and non-violence influenced both Mohandas Gandhi and Martin Luther King, Jr. Gandhi as a twenty-five year-old lawyer working in South Africa, was especially impressed by Tolstoy’s book, The Kingdom of God is within You, and appreciated Tolstoy’s attempt to live according to the principles he espoused (cf. Bartlett 2010: 309, 342). Tolstoy and Gandhi shared commitments to peace, non-violence, the Sermon on the Mount, and vegetarianism, and they corresponded with each other shortly before Tolstoy’s death (e.g., see Tolstoy 2009: 316-317).

Next up: A summary/analysis of the story.