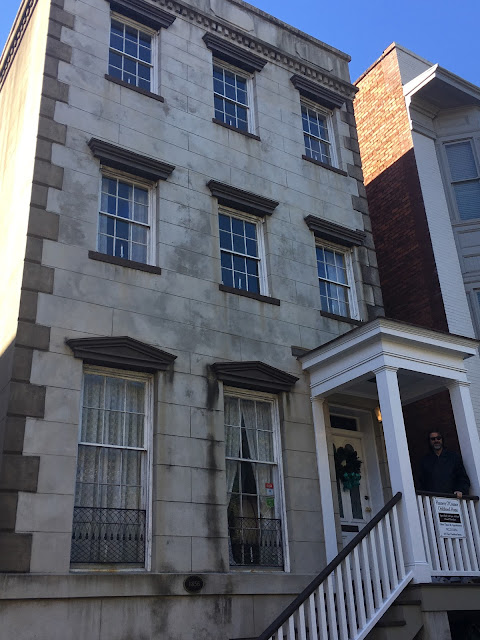 I was in Savannah for a wedding and stopped by Flannery O'Connor's childhood home (photo above).

Her home was just a block away from the church where the wedding was held--the Cathedral of St. John the Baptist--the church she attended as a child (her school was two blocks away).

My favorite story about her childhood was when she taught a chicken to walk backwards, and she and the chicken were featured in a news reel that was seen around the U.S. Unfortunately, I had to cut the anecdote from the book (because of length), but here is a description of it:

O’Connor was born in a prominent Irish Catholic family in Savannah, Georgia, on March 15, 1925. In the 1930s, O’Connor first gained brief national fame when she taught a chicken to walk backwards. Word of the feat spread, and a New York newsreel company made a short film of O’Connor and her backward-walking chicken that played before the feature film in movie theaters all over the United States (Kirk 2008: 3-4).

As I wrote in an earlier blog post, that story does not directly help us understand how O'Connor uses the parables in her work. But it is an interesting bit of trivia that can be seen as a "character-revealing" akme (See Gowler, Host, Guest, Enemy, and Friend 1991: 123). It also, as the chapter explains, is connected to the famous O'Connor peacocks.

The section on O'Connor in the book still engages with a lot of fascinating material in O'Connor's work, especially her use of the parable of the Sower in her second and final novel: The Violent Bear it Away (the title is a quote from Matthew 11:12).

A friend and colleague of mine, Molly McGehee, found the newsreel of O'Connor and her backward-walking chicken and sent it to me.  Enjoy!
at December 31, 2016