My Article in the Washington Post on the National Day of Prayer: Re Roger Williams, Religious Liberty, and the Wheat and Tares Parable (II)

Yesterday The Washington Post published my essay on whether the government should proclaim "Days of Prayer."

Here is the photo they chose to use: 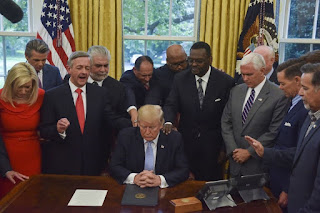 But when I was asked to write this essay in The Washington Post, I decided that I should also take a stand against any government—federal, state, or local—proclaiming Days of Prayer.
The beginning point for my research and ultimate decision is found in my book, The Parables after Jesus, in the section devoted to Roger Williams and his debates about religious liberty with John Cotton. It included a lengthy discussion of the parable of the wheat and tares.
The article appears in the “Made by History” section of The Washington Post.
I will let you read the article itself, if you are interested, but I will include some excerpts.

The United States has celebrated a National Day of Prayer since 1952, and many other officials have declared Days of Prayer for various things as well. Most people think that the term “wall of separation between church and state” comes from Thomas Jefferson in his 1802 letter to the Danbury Baptist Association. But there are three things most people don't know about that letter and its context.
First, Baptists, the group Jefferson was addressing in his letter, were a persecuted minority in Colonial America, as well as strong advocates for the separation of church and state. They and other nonconformist religious groups were persecuted by such things jail time for preaching, coercion to pay taxes to support the state church and punishments such as imprisonment, dunking and public whipping, (although unlike the four Quakers hanged in Boston, no Baptists appear to have been executed because of their faith). So Baptists historically were leaders in championing the separation of church and state, unlike today, when groups such as the Southern Baptist Convention seek to merge church and state—their idea of “church,” of course.
Second, the first draft of Jefferson’s letter clearly indicates that he opposed government proclamations for days of fasting, prayer or thanksgiving. In the restored draft of that letter, Jefferson argued that because of this wall of separation, he, unlike his presidential predecessors, refrained from “prescribing even occasional performances of devotion.”

Before sending the letter, however, Jefferson consulted with his attorney general, Levi Lincoln, who advised him to delete that “too combative” statement. Some supporters of state-sponsored days of prayer twist Jefferson’s words to make it appear that he supported such use of government authority. But in the very same paragraph that they use to misrepresent Jefferson’s view, Jefferson clearly stated his opposition to proclaiming days of prayer: “I do not believe it is for the interest of religion to invite the civil magistrate to direct its exercises, its discipline, or its doctrines; nor of the religious societies that the general government should be invested with the power of affecting any uniformity of time or matter among them.”

The hypocrisy of using Jefferson’s words, especially in a paragraph that directly opposes a Day of Prayer being proclaimed by the government, to support the government proclaiming them is simply incredible. It has to be a deliberate attempt to misinform people.
But the third aspect of Jefferson’s letter is something that most people do not realize. Jefferson did not coin the term “wall of separation.” That term came from Roger Williams, an important Christian minister in Colonial America. Jefferson was primarily concerned that the church would “contaminate” the state. Williams was primarily concerned that the state would “contaminate” the church.

Finally, Jefferson’s “wall of separation” language wasn’t actually Jefferson’s language at all. It was first used by Roger Williams in 1644. Many early Puritans envisioned themselves as a “New Israel” and a “Christian commonwealth” in the New World. Williams, though, disagreed strongly with identifying anything but the church as “New Israel.” He proclaimed that freedom of religion and the “wall of separation” of church and state were inherent in the teachings of Jesus (for example, Matthew 13:24-30) and were also essential for an orderly, peaceful and just society. Christians should not promote or support any religious coercion, ministers should have no civil authority, and civil authorities should not be permitted to punish or coerce religious dissenters.

Some more details about this: Many early Puritans envisioned themselves as a “New Israel” and interpreted biblical texts about ancient Israel as applying typologically to their “Christian commonwealth” in the New World (e.g., John Winthrop’s famous speech, “City upon a Hill”). Williams, though, disagreed strongly with identifying anything but the church as “New Israel” and used the term “wall of separation” in his resulting debates about religious liberty with the eminent Puritan minister John Cotton.
Cotton used Jesus’s parable about the Wheat and Weeds (Matthew 13:24-30) to argue that the church could enforce religious conformity and use censure, excommunication, and even the “Civil Sword” of the state as punishments for “sinners.” Williams responds that such persecution is a perversion of the teachings of Jesus because the parable instead commands Christians to advocate for religious liberty and to oppose any coercive policies of the state concerning religion. The church, Williams argues, is a beautiful garden within the “wilderness” of the sinful world, and Jesus’s parable demonstrates that the “garden” of the church must remain separate from the “field” of the world. If the “wall of separation between the garden of the church and the wilderness of the world” is breached, the church becomes corrupted, a terrible mistake in Christian history that began with Constantine, the first Roman emperor who identified as a Christian.
Williams was banished from the Massachusetts Bay Colony in 1635, then played a leading role in founding Rhode Island, which was chartered by King Charles II in 1663 with “full liberty in religious concernments.” Rhode Island thus became a refuge for all types of dissenters — believers and nonbelievers.
I make a number of other arguments in the Washington Post article, but you can read them there, if you wish (e.g., I argue that the Kentucky legislature should better fund its schools and work against gun violence in schools instead of proclaiming days of prayer for the victims of gun violence in schools).
Instead, I will cite the conclusion of the article:

In many ways, the United States lives up to the idea of religious liberty as espoused by Williams and Jefferson. The Establishment Clause of the First Amendment (“Congress shall make no law respecting an establishment of religion, or prohibiting the free exercise thereof . . .”), for example, enshrines religious freedom and the separation of church and state into the U.S. Constitution.
It is also a fact, however, that a majority of Americans do not oppose their government proclaiming a national day of prayer (most Americans also support allowing daily prayers in public schools).
So why is it a problem for a president or governor to proclaim a day of prayer? Because it is one small example of the many larger breaches in the wall of separation of church and state that lead to the loss of religious liberty, especially for non-Christian citizens.
While it is true that today we do not find the same type of religious persecution in the United States as occurred in most of Colonial America, our Christian-majority nation sometimes does not live up to the religious liberty championed by Williams and Jefferson. Just ask the people who until 2015 were denied marriage licenses because of religious beliefs against marriage equality. Just ask women who might be denied health care because of religious beliefs against abortion and contraception. Just ask people who resent that their tax dollars are used to support private Christian K-12 schools that exclude students because of their religion or sexual identity (and try to prevent Muslim schools from receiving the same tax benefits), or students in public schools who might be forced to listen to prayers to a Christian God in whom they do not believe or do not worship.
It is sometimes easy to forget that although the United States is a Christian-majority nation, it is not a Christian nation. Just as some white Americans find it difficult to discern white privilege or understand why it is important to say “Black Lives Matter,” so too some Christians living in a Christian-majority nation can find it difficult to understand how religious liberty for all people means that Christianity is not favored by the government.
To paraphrase an old saying, when you are accustomed to religious privilege, religious equality can seem like oppression.