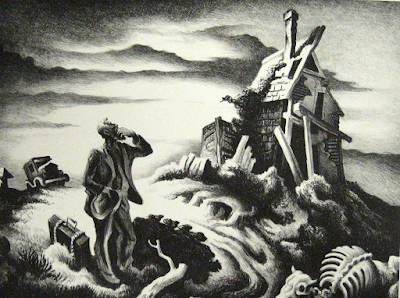 I've published two "public scholarship" essays this month (for The Washington Post and Salon), but today I'm working on a book chapter that includes an argument that Thomas Hart Benton's "Prodigal Son" portrays an understanding of labor and migration similar to the one in John Steinbeck's The Grapes of Wrath (Benton also created images for the film based on the book).

I included part of these arguments in The Parables after Jesus, but in this chapter I will be able to go into much more detail about Benton's life and art and the contexts--personal and national/international--in which he created this work. I also argue that, in part, the image is autobiographical, like many other depictions of the prodigal.

The book chapter, “The Belated Return of the ‘Son’: Thomas Hart Benton’s Prodigal Son,” will be included in Painted Portrayals: The Art of Characterizing Biblical Figures. Bible and Its Reception Series. Atlanta: Society of Biblical Literature Press, forthcoming, 2019.