Chapter 1 of the revised expanded edition of What Are They Saying about the Parables? 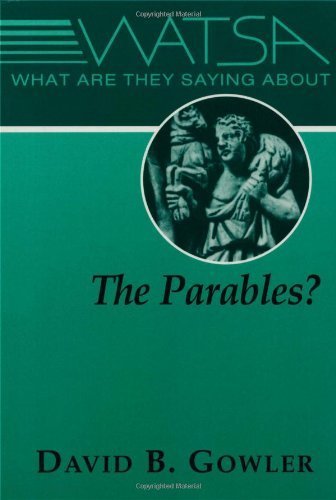 Chapter 1: Historical-Critical Approaches to the Parables
Chapter 1 of the revised expanded edition, although it is the least revised of the seven original chapters, still contains some significant additions. The section on Adolf Jülicher’s Die Gleichnisreden Jesu is greatly expanded, since most people do not have access, in one way or another, to this still-untranslated work.
Although I could have begun with earlier scholars. I decided to start with Jülicher, since my The Parables after Jesus covers people before him and since modern historical-critical approaches essentially (in earnest) begin with him. Although his categories and aspects of his approach have now been superseded, many of his discussions still influence current debates (e.g., whether to distinguish between the parables of the historical Jesus and the parables as they are found in the Synoptic Gospels, how to handle allegorical elements/interpretations, etc.).
The chapter includes a section on Historical-Eschatological Approaches, such as found in C. H. Dodd’s The Parables of the Kingdom, B. T. D. Smith’s The Parables of the Synoptic Gospels, and the work of Joachim Jeremias. Like with Jülicher’s work—and all others covered in this book—I assess the strengths, weaknesses, and contributions of these scholars.
The next major section covers Redaction-Critical Approaches, including the important work of Jack Kingsbury’s redactional study of the parables in Matthew 13 and Charles Carlston’s The Parables of the Triple Tradition. Redaction criticism made many advances, but despite its productive move back toward the texts, it still focuses primarily on the gospel authors, or, more specifically, on the author’s specific historical situation behind what is supposedly reflected by the text—such as Kingsbury’s detailed theory of the close interaction of Matthew’s “community” with “Pharisaic Judaism.” I would argue, however, that such specific historical reconstructions, whether of events in the ministry of Jesus (e.g., Dodd, Jeremias) or of situations in the communities of the evangelists (e.g., Kingsbury), attempt to peer through the murky window clouded by the processes of communication. Ideology, cultural and social locations, and many other factors distance us from the authors’ particular historical situations. Our hypothetical reconstructions are complicated by the tendentious nature of the primary sources themselves. We should approach these reconstructions with appreciation, but also with mature skepticism and critical acumen.
The chapter then discusses Parables and the New Hermeneutic, including Ernst Fuchs (with a background discussion of the approach taken by his teacher, Rudolf Bultmann and the work of Martin Heidegger), one of the leaders of the “New Quest” of the historical Jesus (For an overview of the New Quest, see David B. Gowler, What Are They Saying About the Historical Jesus? (Mahwah, NJ: Paulist Press, 2007), 18–30). As Fuchs states very clearly: “I am convinced that the question of the immediate meaning of Jesus for us cannot be answered apart from the question of the ‘historical’ Jesus” (Studies of the Historical Jesus (Naperville, IL: A. R. Allenson, 1964), 7).
Fuchs is not talking about “facts” in the sense of specific historical events in the life and ministry of Jesus. Instead, this New Quest is aided and abetted by the “New Hermeneutic”: parables are “language events” in which Jesus’ understanding of his own existence, situation, and faith “enters language,” and his understanding of existence is still available for us to share. The faith of Jesus, the “resolute decision” he made for God and God’s kingdom, comes to us today through the language event of parables. The literary form of the parables promotes this performative aspect: They function primarily as similitudes—as analogies or indirect speech—in that their point of comparison (between, for example, the kingdom of God and the story told in a parable) can enable the faith journey of Jesus to become that of the believer.
This section also discusses in detail the early work of one of Fuchs’s students, Eta Linnemann, who wrote a book on the parables that, according to Fuchs, made this complex approach “completely intelligible.”: Eta Linnemann, Jesus of the Parables: Introduction and Exposition (London: SPCK, 1966). Linnemann explains that a parable is a form of communication, a dialogue between narrator and listener. As such, it is an urgent endeavor, because the narrator wants to do much more than just impart information. The teller of a parable wants to influence the other person, to win agreement, to force a decision in a particular, concrete historical situation. The parable is the means of overcoming any resistance the hearer might have.
To a certain extent, both Fuchs and Linnemann retain an interest in a historical understanding of the text. In addition, they see the parables as either the medium for conveying Jesus’ understanding of the world (Fuchs) or as Jesus’ verbal bridge to his opponents (Linnemann). The practitioners of the New Hermeneutic, though, despite their concern for literary form and language, did not adequately examine the literary aspects of the parables. Though their stress on the hearer of the parable was indeed a step forward, in their interest to respond to questions of contemporary existence they (re)expressed the parables in existentialist terms and used the dominant model of the sermon. What remained undone was the construction of a literary method that would serve as a more solid foundation for examining parables as parables. That literary path would be blazed by such scholars as Amos Wilder, Dan Via, Robert Funk, and John Dominic Crossan.
The next post will cover chapter 2 of the revised, expanded edition of What Are They Saying about the Parables? in which I analyze the works of these and other scholars.
at February 19, 2021