A New Book Project on the Reception History of the Parables

I just signed a contract (November 2013) with Baker Academic (Baker Publishing Group) to write a textbook on the reception history of the parables. I have been working with James Ernest of Baker, and the topic is an exciting but daunting one: examining how the parables in the NT Gospels have been interpreted over the centuries.

This blog will document the process of writing that book, and it will include works that I find and insights I have gained through my research for the book.

The blog, like the book, will cover not only written interpretations but visual and other interpretations. I intend not only to focus on theological or academic responses (the book will not concentrate on academic debates in modern scholarship that are adequately covered elsewhere, such as in my What Are They Saying About the Parables? with Paulist Press) but also on other types of responses including literature, the visual arts, music, social and political elements, and so forth.

My goal is to include a number of diverse responses to the parables, to allow a wide variety of responses to be heard while attempting to balance depth and breadth, and to focus on important voices while being as comprehensive as possible.

The manuscript is due by December 1, 2015, and I hope to update this blog regularly during the writing of the book and maybe beyond.

The image below is a photo I took at the Rembrandt House Museum in Amsterdam on October 20, 2013. It is a close up of the father and son in his Return of the Prodigal etching. More on that print later. 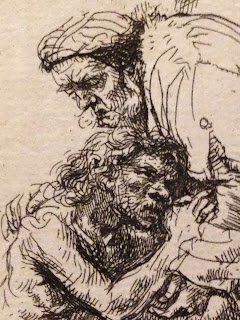