Clement of Alexandria (part 4: Who is the Rich Man that Shall be Saved? continued)

As I noted yesterday, Clement’s reasoning about Jesus' real meaning about the dangers of wealth being "one’s attachment to wealth" also has a practical benefit. If wealthy people give away all they have and become destitute, they cannot help anyone else and also might need assistance themselves: It is much more beneficial, Clement says, that rich people not be destitute—and therefore in need of assistance themselves—but they also must help others with their possessions (13):

How could one give food to the hungry, and drink to the thirsty, clothe the naked, and shelter the houseless, for not doing which he threatens with fire and the outer darkness, if each man first divested himself of all these things?

The rich should therefore act like Zacchaeus, the rich tax collector who gave away half of his possessions to the poor (Luke 19:1-10). After Zacchaeus had done so, Jesus declared, “Today salvation has come to this house.” Clement concludes that riches that also benefit our neighbors “are not to be thrown away” (13); on the other hand, we must “renounce those possessions that are injurious” (15; cf. Clement’s discussion of the parable of the Rich Man and Lazarus and the parable of the Great Dinner in which he argues that possessions themselves are not condemned but the covetous “inordinate affection” for possessions is condemned; Stromata 5.12).
Clement notes that Jesus declared the greatest commandment to be to “love the Lord your God with all your soul, and with all your strength” (Clement tends to cite biblical passages imprecisely), with the second being to “love your neighbor as yourself.” When the lawyer then asks, “Who is my neighbor?” Jesus did not say a “blood-relation, or the fellow-citizen, or the proselyte, or him that had been similarly circumcised, or the man who uses one and the same law.” Instead Jesus speaks of someone who was stabbed (Clement adds this item to the story) and left half-dead by robbers, passed by the priest, looked sideways at by the Levite, but pitied by the vilified and excommunicated Samaritan. The Samaritan, unlike the others, did not travel “by chance,” but came provided with things the wounded man needed to nurse him to health—oil, bandages, a beast of burden, and money for the inn-keeper. The point of the parable is that the despised Samaritan proved to be the neighbor of the man in distress, and Jesus says to go and do likewise (28).

After this discussion of the moral aspects of the story, Clement begins to apply the parable to his contemporaries with some allegorized elements. Jesus is the Good Samaritan, because he has “pitied us, who by the rulers of darkness were all but put to death with many wounds, fears, lusts, passions, pains, deceits, pleasures.” Jesus is the true physician who has

poured wine on our wounded souls (the blood of David’s vine), that brought the oil which flows from the compassions of the Father, and bestowed it copiously. He it is that produced the ligatures of health and of salvation that cannot be undone,—Love, Faith, Hope. He it is that subjected angels, and principalities, and powers, for a great reward to serve us . . . . We are therefore to love Him equally with God.

The best answer to Jesus’ question about which one proved to be the neighbor (Luke 10:36) is that Jesus, as Savior, proves to be the ultimate “neighbor,” with human beings being the wounded man who is healed by Jesus (see Roukema 61). Clement then closes his treatise by saying that one who loves Christ will keeps his commandments to love God and neighbor (Matt. 7:21, 8:16-17; Luke 6:46), including caring for the needy, since Jesus identifies himself with the hungry, thirsty, naked, sick, the stranger, and the prisoner (Matt. 25:34-40; Who is the Rich Man that Shall be Saved? 29-30).

I was fortunate to see van Gogh's The Good Samaritan (above) in person last fall. It was on loan to the van Gogh museum in Amsterdam. Biblical topics are rare from him. Since the painting was on loan, I was unable to take a picture, but it was placed next to his Pietà (also after Delacroix), 1889, and I was allowed to take a picture of it: 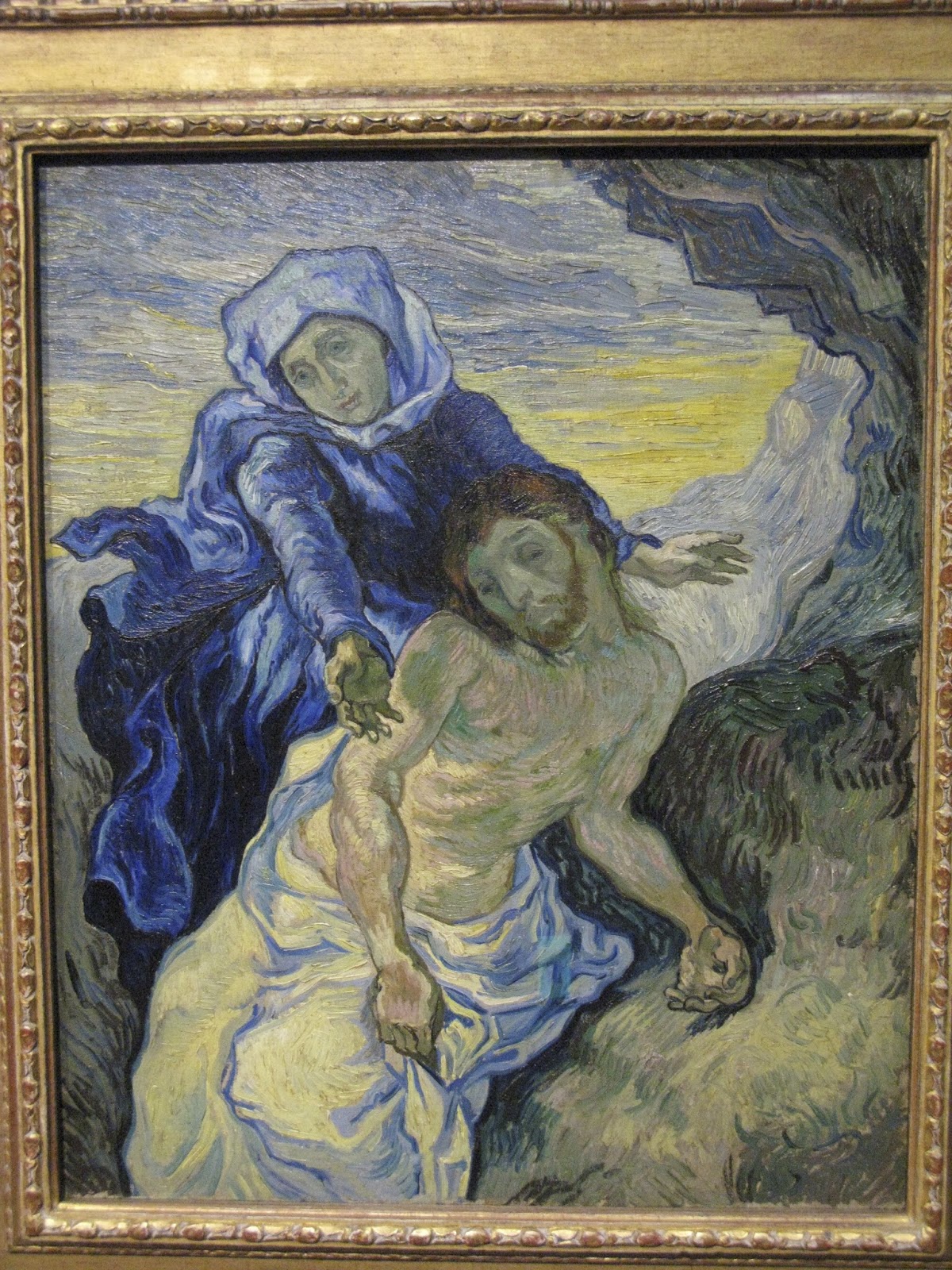