Should Heretics be Tolerated? (Part 4 of ∞)


The Basilica of Santa Maria Novella in Florence is an amazing (Dominican) church, with a distinctive façade and incredible art inside. I went there primarily to see Masaccio’s The Holy Trinity, a truly transformative work of art that had a big impact on other artists (especially the use of perspective).

Another work of art worth seeing inside the church is the Triumph of St Thomas Aquinas fresco by Andrea da Firenze in the Cappellone degli Spagnoli (Spanish Chapel) on the west side of the nave. The fresco celebrates many academic and scientific contributions of the Dominican order, and Thomas Aquinas serves as the paradigm of those contributions. Thomas sits on a throne holding an open book the text of which he shows to the viewers. Among the many figures represented (e.g., Job, David, Paul, Mark, the Apostle John, Solomon, Isaiah, Moses, Luke, and Matthew) are three “heretics” that crouch below the feet of Thomas: Sabellius, Averroës, and Arius. 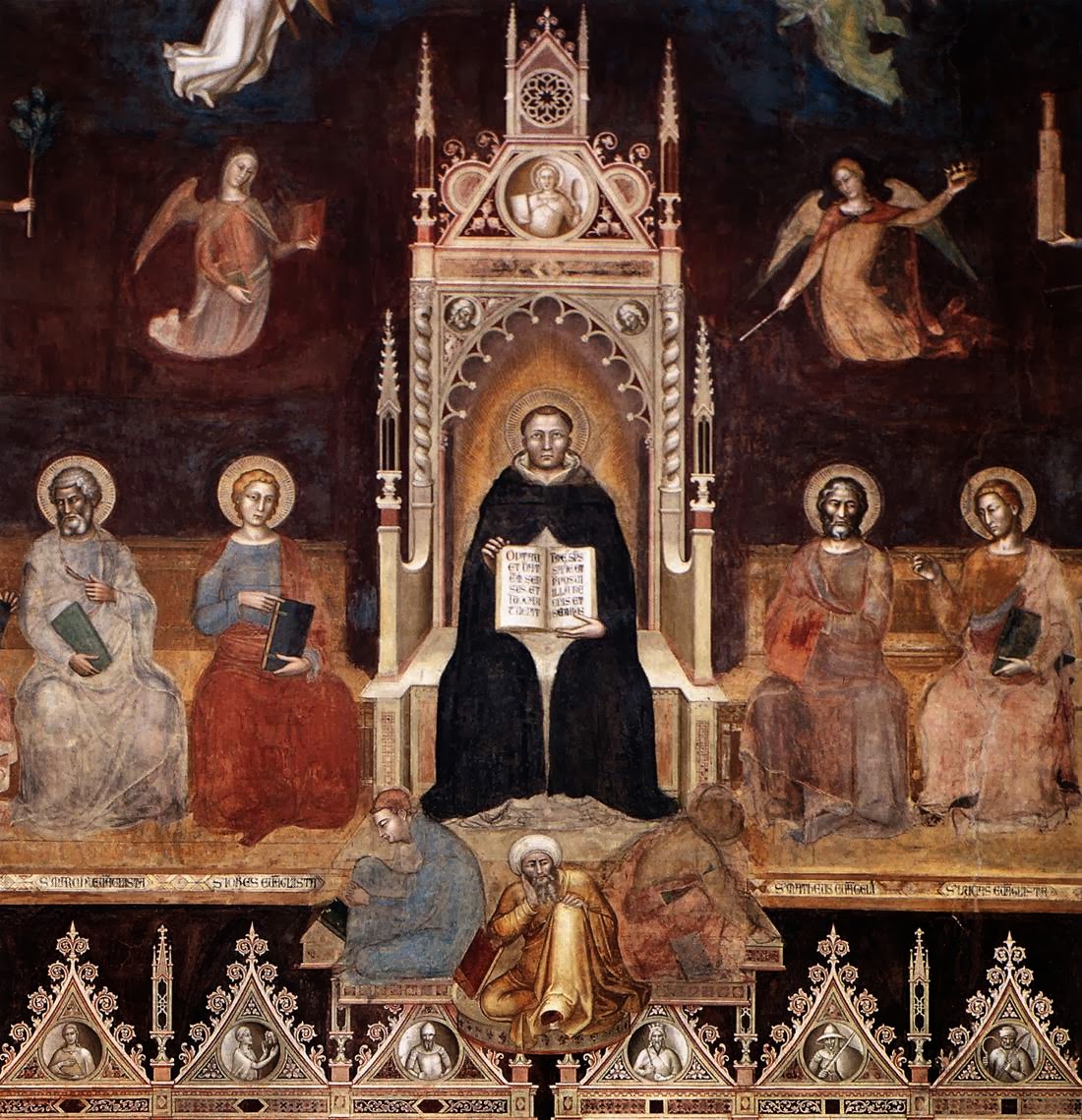 Viewers can see their resignation if not despair at being defeated by Thomas by their postures and expressions (e.g., Averroës rests his hand in his hand). See the discussion on WGA (the photos come from there as well).

Back to Thomas and his interpretation of the parable:

Thomas's Interpretations of the Wheat and Weeds Parable

The parable of the Wheat and Weeds, as I mentioned in part 2 of this series of posts, also comes into play when Thomas addresses the question: “Whether [Christian] heretics ought to be tolerated?” Thomas argues that it could be examined from two sides. First, the heretic deserves to be excommunicated from the church and “severed from the world by death,” because it is a worse offense to corrupt another’s faith (and damage an eternal soul) than to forge money (and damage an earthly life). The secular state condemns forgers to death, and heresy is a much graver matter, so “much more reason is there for heretics, as soon as they are convicted of heresy, to be not only excommunicated but even put to death.” The church, however, has mercy and looks to convert the heretic, instructing them more than once. When heretics refuse to be corrected, though, the church has to keep in mind the salvation of others that heretics might lead astray. Therefore the church should not only excommunicate heretics from the church but also should deliver them “to the secular tribunal to be exterminated thereby from the world by death.”

One of the objections that Thomas answers is that Jesus commanded his followers in the parable of the Wheat and Tares to allow the tares (i.e., heretics) “to grow until the harvest” (i.e., the end of the world). Thomas rejects that argument, though, because excommunication by the church is not the same as “uprooting” the heretic and, in fact, should be an attempt to save the heretic’s soul (1 Cor 5:5). Thomas also observes that the parable cautions against uprooting the tares since the wheat would also be uprooted. Killing a heretic, though, uproots the heretic but not anyone else; therefore killing a heretic “is not contrary to Our Lord's command, which is to be understood as referring to the case when the cockle cannot be plucked up without plucking up the wheat” (Summa Theologiae, p. 2756 in CCEL).
Thomas later utilizes the parable to address a similar question: “Whether it is lawful to kill sinners?” Once again, interpreters had argued that Jesus’ parable meant that God forbids the killing of a sinner. Thomas quickly cites verses that state the opposite (e.g., Exodus 22:18 says that sorcerers should be put to death). Since the health of the whole body sometimes demands the excision of one of its parts if it is decayed beyond repair or infectious to the other parts of the body, it is “both praiseworthy and advantageous to have it cut away.” Likewise, if a sinner is dangerous and “infectious” to the community as a whole, “it is praiseworthy and advantageous that he be killed in order to safeguard the common good, since ‘a little leaven corrupteth the whole lump’ (1 Cor 5:6).”

Thomas then specifically responds to discussions of the parable of the Wheat and the Tares that argue against killing a sinner. Thomas again disagrees:

Our Lord commanded them to forbear from uprooting the cockle in order to spare the wheat, i.e. the good. This occurs when the wicked cannot be slain without the good being killed with them, either because the wicked lie hidden among the good, or because they have many followers, so that they cannot be killed without danger to the good, as Augustine says (Contra Parmen. iii, 2). Wherefore our Lord teaches that we should rather allow the wicked to live, and that vengeance is to be delayed until the last judgment, rather than that the good be put to death together with the wicked. When, however, the good incur no danger, but rather are protected and saved by the slaying of the wicked, then the latter may be lawfully put to death.
God sometimes slays sinners to bring about the good; other times God allows them additional time to repent. God knows best, and human justice should do its best to emulate God, putting to death those persons who are dangerous and allowing time for repentance for those who sin but who do so “without grievously harming others” (Summa Theologiae, pp. 3324-5 in CCEL).

Thomas returns to this subject in a larger discussion of justice and whether vengeance is justified or lawful. Vengeance is sometimes justified and lawful, Thomas says, even to the point of putting someone to death. The parable of the Wheat and Tares does not forbid capital punishment, because the Bible elsewhere supports it as being “lawful and virtuous so far as it tends to the prevention of evil.” Some people are only motivated by fear—fear of losing one’s life, safety, freedom, or material goods—so such punishments sometimes have to be applied. Thomas again concludes:

Our Lord forbids the uprooting of the cockle, when there is fear lest the wheat be uprooted together with it. But sometimes the wicked can be uprooted by death, not only without danger, but even with great profit, to the good. Wherefore in such a case the punishment of death may be inflicted on sinners.

As Scripture says, all who sin are deserving of eternal death, so punishments incurred in life are “more of a medicinal character” (Summa Theologiae, pp. 3324-5 in CCEL).

Later this week, a few comments about how some in the church connected vegetarianism to heresy and then on to Wazo of Liège's interpretation of the parable.

P.S. It has nothing to do with the reception of the parables, but just in case you didn't click on the link to Masaccio’s The Holy Trinity above. It's the first thing I saw when I walked into the amazing church: