It is hard to not respond to every outrage that we are experiencing now in the United States, but it seems that Ezra Klein may have found a way to explain why the current U.S. president does some of the things that he does. See Klein's article/post: "Donald Trump’s favorite story perfectly describes his first 10 days in office."

The fable of The Snake is about a "tender-hearted woman" who finds a wounded snake on the road. She takes it home and nurses it back to health, but when the snake recovers, it bites her. As the woman is dying from the bite, she asks the snake why it had bit her after all she had done for it. The snake replies, "You knew full well I was a snake before you helped me."
Trump used that fable during the campaign to speak of Syrian refugees. His recent executive order--signed on Holocaust Remembrance Day--banning refugees from seven majority-Muslim countries, is another reminder that Trump operates from the perspective of that fable.

The lawyer then asked Jesus: “And who is my neighbor?” (10:29), and Jesus replied with a parable that describes the extraordinary actions of a man, a hated Samaritan, who assisted another human being in need, a man half dead by the side of the road who had already been ignored by two religious people who had “passed by on the other side.” The Samaritan, in contrast, had compassion for the man, demonstrated that compassion in concrete ways, and “took care of him” (10:34).

As always, Jesus expects a response from his audience concerning his parables, a response that involves both understanding and action, because Luke tells us this is what happened after Jesus finished the parable:

The current president of the United States has replaced the parable of the Good Samaritan with the fable of The Snake.

I'll stick with Jesus's story as a much better guide for how to live one's life.

H/T to Rita, who recommended that I write about The Snake fable on this blog.

P.S. Per the reference to Holocaust Remembrance Day in the third paragraph above, please see the powerful twitter account I screen grabbed here: 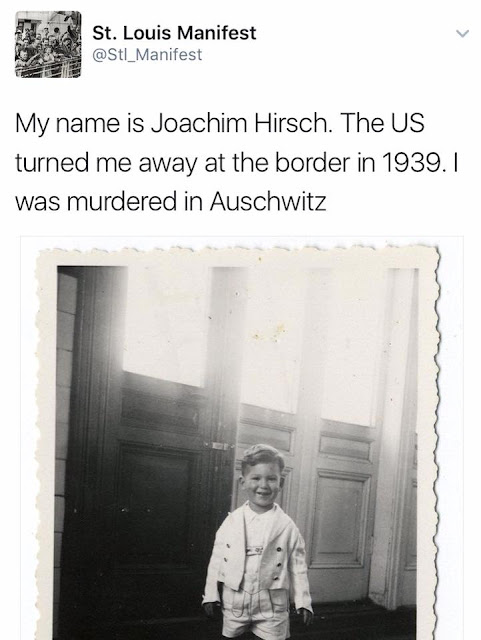