News article about the book

Cathy Wooten wrote a very nice piece about the parables book on the Oxford College of Emory University website: 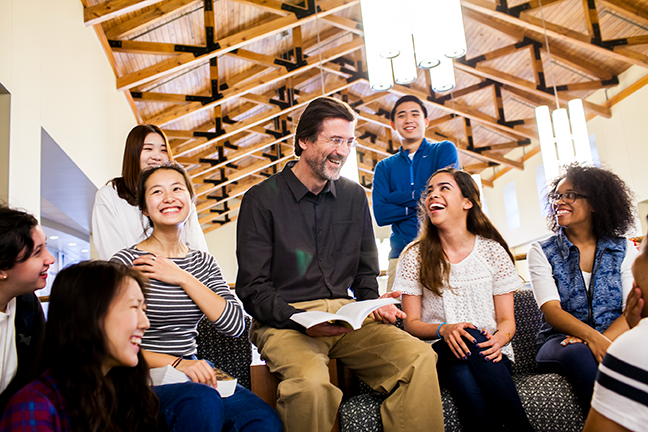 Gowler book on parables is published

David Gowler's new book explores the myriad interpretations of the parables of Jesus and how they continue in relevance today.

David Gowler, the Dr. Lovick Pierce and Bishop George F. Pierce Chair of Religion and director of the Pierce Program of Religion at Oxford College, is the author of a new book published by Baker Academic. The Parables after Jesus: Their Imaginative Receptions across Two Millenia explores the myriad interpretations of the parables of Jesus and how they continue in relevance today.

In his preface, Gowler describes parables as “stories…that create vivid pictures in one’s mind, stories that enable us to experience profound truths in often deceptively simple ways, stories that challenge us to respond and act—not only to do better, but also to be better.” The book considers some 33 parables of Jesus, moving chronologically in five sections from antiquity through the present day and focusing on multiple and varied interpretations. These include not only expected forms—biblical exposition, sermons, classical music, and literature—but also the unexpected—science fiction, politics, and the blues. The wide range of sources includes Augustine, Hildegard of Bingen, Martin Luther, William Blake, and Martin Luther King, Jr., but also playwrights Antonia Pulci and William Shakespeare, artists Domenico Fetti and Thomas Hart Benton, poets Emily Dickinson and George Herbert, novelists Octavia Butler and Flannery O’Connor, blues musician Robert Wilkins, hymnist Fanny Crosby, the Islamic text Sahih al-Bukhari, and the writings of Thich Nhat Hanh.
These reflect Gowler’s renown as a scholar in the field of reception history—the study of how various biblical texts have been received, interpreted, and used over the time since their writing. Also informing the book is Gowler’s scholarship in art and its use in the interpretation of biblical texts, an interest he employs in his writing as well as in the classroom. His Oxford classes include the popular course “Portraits of Jesus,” an exploration of the New Testament gospels as literature and the ways in which they have been reinterpreted through the visual arts.
The book has been enthusiastically received by reviewers in the United States, Canada, and the UK. Matthew Skinner of Luther Seminary calls the book “a knowledgeable guide through a lively history,” and Christine Joynes, director of the Centre for Reception History of the Bible at the University of Oxford says it is “a wonderfully engaging volume [that] offers a rich array of insights…David Gowler's immense learning is expressed with superb clarity, making interpretations of the parables across two millennia accessible to all.”
Gowler began reflecting on the research for this latest book and commenting along the way of its writing in his blog A Chorus of Voices: The Reception History of the Parables.
The Parables after Jesus adds to a long bibliography of Gowler’s works. His most recent prior publication is the widely praised 2014 book, James through the Centuries, a volume in the Blackwell Bible Commentaries, a series focusing on reception history. Gowler’s other books include Host, Guest, Enemy, and Friend: Portraits of the Pharisees in Luke and Acts (1991), What Are They Saying About the Parables? (2000), and What Are They Saying About the Historical Jesus? (2007). He is the editor of and contributing writer to Radical Christian Voices and Practice (Oxford: Oxford University Press, 2012) and the author of numerous articles, book chapters, and book reviews. He has edited 22 books and since 1991 has served as co-editor of the series Emory Studies in Early Christianity.
at March 30, 2017