Chapter 4 (totally new chapter!) of revised/expanded What are They Saying about the Parables, Chapter 4 (part 1) 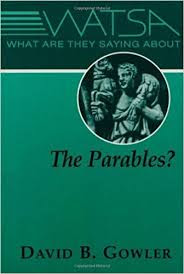 What are They Saying about the Parables (second edition),
Chapter 4: The Parables of Jesus in/and the Gospels:
The Dialogues Continue (Part 1: Arland Hultgren)
Introduction
Parable scholarship consists of diverse and sometimes diametrically opposed points of view. Diversity, however, is not chaos. Parable scholarship can best be described as heteroglossia, which the philosopher Mikhail Bakhtin describes as the dynamic interaction of a number of voices, ideologies, and positions (see Mikhail Bakhtin, The Dialogic Imagination). Scholars speak in various discourses, from different perspectives, and using diverse approaches. Yet Bakhtin’s dialogical perspective, even though heteroglossia contains voices that can contradict each other (262–63), also can include polyphony, where many contesting voices representing a variety of ideological positions engage as equals in dialogue (see Mikhail Bakhtin, Problems of Dostoevsky's Poetics, 6–7). Similar to the concept of heteroglossia, the term polyphony—in all of its profoundly pluralistic aspects—is certainly analogous to current parable scholarship. Such divergent voices are essential, because, as Bakhtin notes, “Truth is not born nor is it to be found inside the head of an individual person, it is born between people collectively searching for truth, in the process of their dialogic interaction” (Bakhtin, Dialogic Imagination, 110. Cf. David B. Gowler, “Heteroglossic Trends in Biblical Studies: Polyphonic Dialogues or Clanging Cymbals,” Review and Expositor 97:4 (2000): 443–66).
That search for truth in parable scholarship continues, and scholars have made significant progress in recent years, for example, in placing parables more firmly in their Jewish, Hellenistic-Roman, and social contexts. Those aspects are covered in chapters 5, 6, and 7 of What are They saying about the Parables? In addition, although scholarly works since 2000 are discussed in every chapter of this book, this new chapter (Chapter 4) analyzes recent discussions that exemplify a continuing focus on familiar topics: whether, to what extent, or how Synoptic parables should be interpreted as parables from the historical Jesus. It also is different in that a smaller number of scholars and their recent books/articles are examined in greater depth.
The first section of this chapter, In the Shadow of Jeremias: The Synoptic Parables of Jesus for the Church, focuses primarily on Arland Hultgren’s The Parables of Jesus. This book seeks to fill a void that Hultgren saw within parable scholarship, namely, “a study of the parables that is comprehensive, drawing upon the wealth of parable research, and that is at the same time exegetical and theological” (xi). Hultgren thus primarily interprets the parables of Jesus “within the Christian church” and for proclamation in the church (17), an aspect central to Christian theology and experience, since parables are Jesus’ principal mode of teaching (1).
In Hultgren’s view, Jesus’ parables have universal appeal as stories that connect with the “human condition,” but they also have been “preserved, taught, and interpreted in the preaching of the church precisely because they are parables of Jesus, regarded as the crucified and resurrected Redeemer.” The parables, then, must be interpreted as communicating Jesus’ distinctive experience, understanding, and proclamation of God’s kingdom (11–12). Although discerning the “original setting” of the parables in Jesus’ ministry is extremely difficult, Hultgren does not want to abandon this historical task completely. Yet since he seeks to interpret the parables of Jesus in the context and proclamation of the Christian church, he advocates examining them in their literary contexts in the (canonical) gospels, not in light of the “Jesus of one’s construction” (17) or “within a preconceived notion” of how Jesus “really” used parables. His main goal remains the exegesis of and theological reflection on “the parables of Jesus as transmitted within the Synoptic Gospels” (19).
Hultgren’s interpretations are often insightful, and he includes significant discussions of parables’ first-century contexts and the resulting implications for how modern readers should understand the parables. His important exegesis of Matthew’s “Final Judgment” (25:31–46), for example, cogently argues that the judgment portrayed is universal—“all of humanity stands before the Son of man awaiting judgment” (313)—and that the acts of mercy to “one of the least of these my brothers and sisters” means helping any person in need (pace interpretations that argue it designates helping Christians in need, such as early Christian missionaries; 317–26).
Yet Hultgren’s interpretations sometimes appear to domesticate Jesus’ more provocative parables. For example, he tends to downplay the economic contexts of parables such as the Rich Fool (104–9) and the Rich Man and Lazarus (110–16). Jesus’ parables tend to step on his listeners’ toes harder than Hultgren often allows.
The next post (Part 2 of Chapter 4) will discuss the section of this chapter, The Parables and Jesus’ “Intention,” that focuses primarily on the second edition of Klyne Snodgrass’s Stories with Intent.
at March 12, 2021