Hope and Despair in Rembrandt's 'The Good Samaritan' 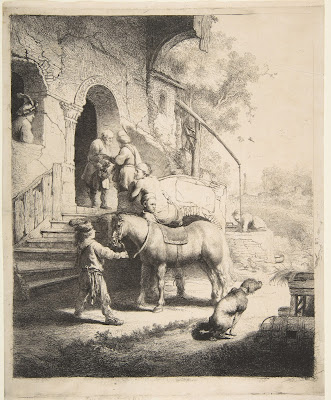 I am delighted that my essay, "Hope and despair in Rembrandt's 'The Good Samaritan'" just appeared in today's National Catholic Reporter.

This essay builds upon one of the four short essays I did for the Visual Commentary on Scripture published by King's College, London, which they entitled with the rather distinctive, "Sh*t Happens."

The National Catholic Reporter essay not only has a more family-friendly name; it also, I think, has a very timely message for the difficult era in which we live, specifically because interpretations of Rembrandt's etching shed light on divergent yet interlocking ways in which human beings respond to difficult circumstances.

One response is of hope; the other is of despair.

I won't post the entire essay (even though the essay is brief), but here is the conclusion:

Another way to approach this image and the parable itself, however, is that this act of compassion and mercy takes place not just in the midst of evil or even in spite of evil, but as a radical and in some ways redemptive act against evil.

To be clear, the parable does not focus on what should happen to the perpetrators of such injustices, whether individual or structural; instead, it illustrates how one should treat the victims of injustices, no matter who they are.

In times of personal and societal distress, it is often difficult to believe, as did Theodore Parker (and Martin Luther King Jr.) that the arc of the moral universe, albeit long, "bends toward justice." Thurman realized that the pervasiveness of injustice does not provide an "escape hatch" of despair that one's actions will not make a difference in creating a better society. He believed that there is a persistent struggle between good and evil, both in oneself and in society, and that all are responsible for acts of justice, mercy and compassion in the world of parable and in the world in which we live.

The command at the end of the parable, to go and do likewise, to show compassion and mercy to those who suffer injustices, focuses our attention on the need to transform ourselves into people who work actively on the behalf of other human beings who suffer similar injustices, doing our part to try to bend the arc of the moral universe toward justice.

The parable of the good Samaritan and Rembrandt's response to it accurately portray the injustices in their worlds and ours. They also do not downplay the fact that the results of one's actions to assist other human beings may be seen as foolhardy or even fruitless. Yet we will never know, unless, as Jesus urged at the end of the parable, and as Thurman himself suggested, that we "try it and see."

Not bad advice from Jesus ("Go and do likewise") and Thurman ("Try it and see").