A Lenten Meditation in NCR: The Way of the Cross from Advent to Lent 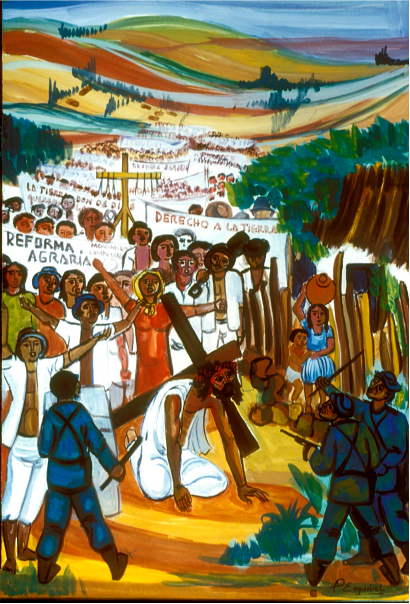 This article is not about a parable, but I want to share it on this blog. The article is found in today's issue of The National Catholic Reporter. In this Lenten meditation, using the work of Adolfo Pérez Esquivel and illustrated by Alastair McIntosh, I argue that the Way of the Cross begins with the Magnificat, is inaugurated by Jesus’s Nazareth sermon, and is completed by Jesus's last week in Jerusalem. The first two paragraphs of the article are:

The Via Dolorosa in Jerusalem begins with commemorating Jesus’s condemnation by Pilate in the traditional site of Pilate’s Praetorium and ends at the Holy Sepulchre with remembering his internment in the tomb. At each of the fourteen stations in this “Way of the Cross,” pilgrims are urged to meditate on the events and meaning of Jesus’s death.

Yet Jesus’s path to the cross did not really begin in Jerusalem. Jesus’s teachings and ministry were the first stages of his path to the cross in Jerusalem, as prefigured in Mary’s Magnificat and proclaimed in Jesus’s inaugural sermon in his hometown of Nazareth. The seeds planted in verses read during Advent thus prepare us for Jesus’s ministry, and Jesus’s proclamation of good news for the poor and his critiques of power, wealth, and oppression led inexorably to the Way of the Cross that we commemorate during Lent.

The article can be found here.

The illustrations by McIntosh can be found here.