The Eye of the Needle is NOT a Gate in Jerusalem 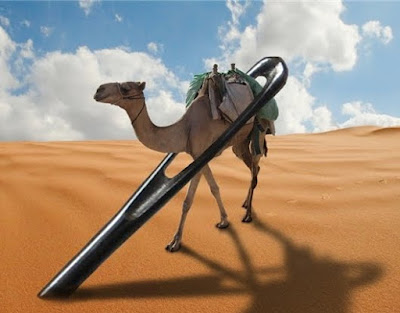 I keep seeing over and over again the claim the the "eye of a needle" means a gate in Jerusalem, so I thought I should repost this comments about that error:
In a commentary for Fortune, I included the following:

Jesus told a wealthy man to sell all his possessions and to give the proceeds to the poor. Jesus then told his disciples how difficult it was for the wealthy to enter the kingdom of God (as likely as a camel going through an eye of a sewing needle).

I added the word "sewing" because I did not have the space to explain that when the Gospel texts said, "a needle," they meant a sewing needle (Hobart argued it was a physician's needle in Luke, but Cadbury put the "Lukan physician's language" theory to rest).

The editor(s) of Fortune removed my citation of the biblical texts (Matt 19:24; Mark 10:25; Luke 18:25) in this instance and for all the other biblical references, so in the numerous comments by readers of the essay who responded to the article, several observed that I had made a mistake or that my knowledge of the Biblical context was incorrect. For example (taken from the Yahoo! Finance page, where it was also posted online):

I agree with Mr. Gowler's assessment, except for one thing. The "eye of the needle" was a gate in the walls of Jerusalem...a little gate. For a camel to pass through, it had to be unburdened and had to stoop down a little. In other words, hold on to your possessions and your pride, and you'll never get through. As far as Mr. Ryan having a problem with the poor carpenter's son from Nazareth, I am in complete agreement.

Other commenters were more caustic about my alleged lack of knowledge of this gate in Jerusalem.

It's interesting how these misconceptions persist, and these domestications of Jesus's words--efforts to tame his radical message--all derive from interpreters' unease with this shocking, hyperbolic statement.

There is no evidence that the saying refers to a gate, including a particular gate in Jerusalem. That arose sometime, most likely, in the middle ages (I remember the version about this mythical gate that I heard from a pulpit growing up is that the camel actually had to pass through the Jerusalem gate on its knees).

If you change one letter in the Greek word (an eta to an iota) that would change the word "camel" to "rope" or "ship's cable," and some scribes evidently made that change in a few manuscripts (e.g., S, 1010, f13), and Origen, Cyril of Alexandria, and a few others favored that view.*

Others claim that the Aramaic word "behind" the Greek word meant a thick rope or a ship's cable (e.g., Lamsa, Gospel Light, 115-116). Others suggest that the word actually means a "large wooden beam" (noted but rejected by Ibn al-Tayyib).

One of the better studies of this saying is in Kenneth Bailey's Through Peasant Eyes, 165-166, and he convincingly makes the argument that this needle is indeed a needle. He also points out that there is a later rabbinic saying in the Talmud (probably dependent) that speaks of the impossibility of "an elephant going through the eye of a needle" (an elephant being the largest animal in Babylonia; Ber. 55b; there also is a comparative text in the Qur'an: Sura 7:40).

One can also point to the analogous saying of Jesus about straining the gnat and swallowing a camel (Matt 23:24) for a similar hyperbolic, impossible task.

The text speaks about something that is impossible for human beings; that rules out a gate where a camel's burden needed to be unloaded before it could pass through.

Many interpreters point to this passage as an example of Jesus's "peasant humor"--it is impossible for the largest animal in the area to pass through such a small aperture--but told from a deadly serious perspective, from a prophet similar to Amos, a "voice from below" who cried out against the injustices of the wealthy of his day.
*Thanks to James Ernest for catching a typo in the earlier version.