Parable of the Sower at St. James the Less Church (London)

Again he began to teach beside the lake. Such a very large crowd gathered around him that he got into a boat on the lake and sat there, while the whole crowd was beside the lake on the land. 2He began to teach them many things in parables, and in his teaching he said to them:3‘Listen! A sower went out to sow. 4And as he sowed, some seed fell on the path, and the birds came and ate it up. 5Other seed fell on rocky ground, where it did not have much soil, and it sprang up quickly, since it had no depth of soil. 6And when the sun rose, it was scorched; and since it had no root, it withered away. 7Other seed fell among thorns, and the thorns grew up and choked it, and it yielded no grain. 8Other seed fell into good soil and brought forth grain, growing up and increasing and yielding thirty and sixty and a hundredfold.’ 9And he said, ‘Let anyone with ears to hear listen!’

As with many images that represent biblical stories, this sculpture tries to include several chronological elements of the parable in one static (in this case, carved in stone) image. Here is a photo that gives a closer view of the image: 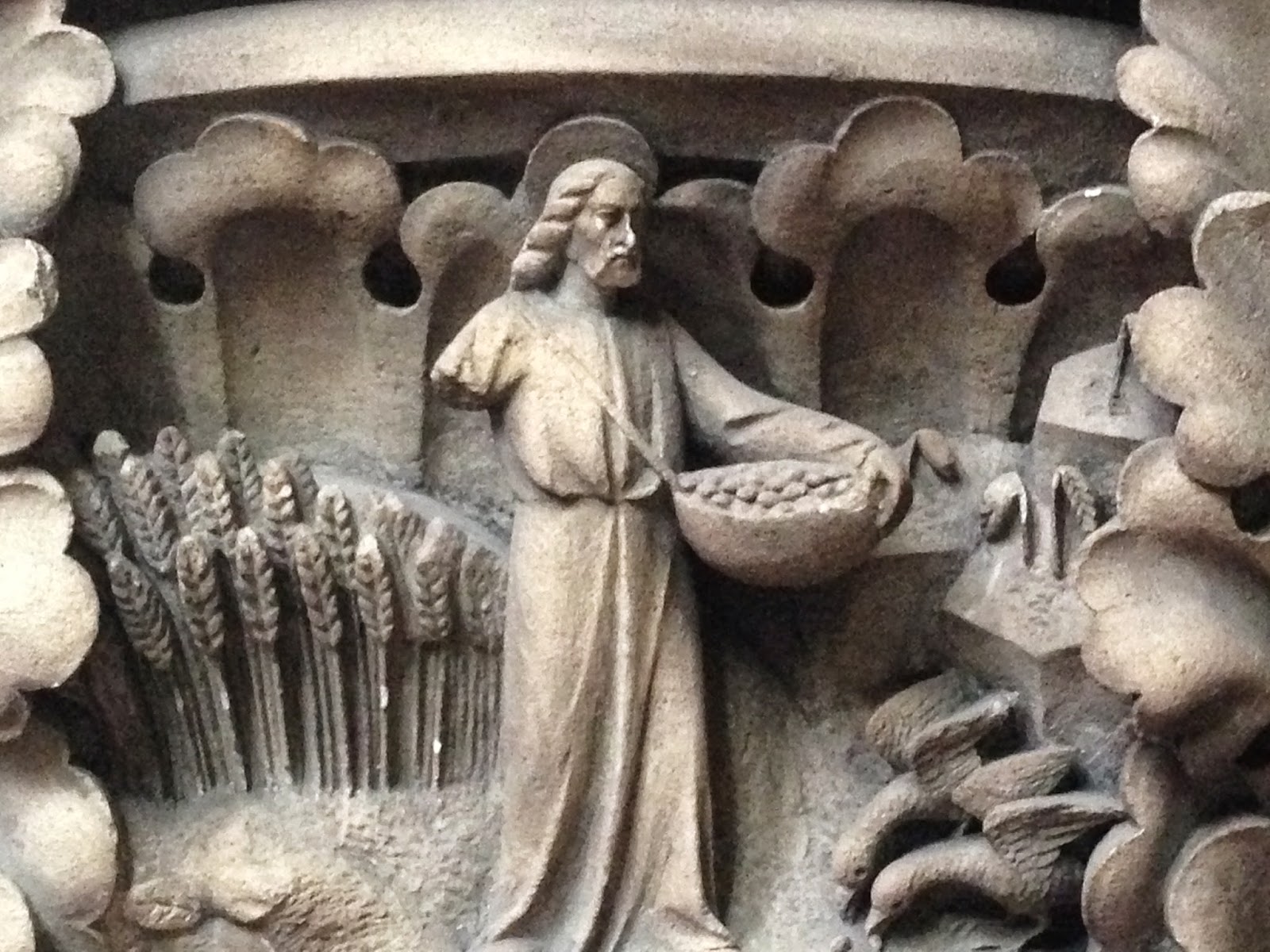 The middle part of the sculpture obviously portrays the sower "as he sowed" (which is now a bit difficult for him, since his arm unfortunately is broken off!). He holds a basket of seed in his left hand, and the basket is supported by a strap over his left shoulder. The decoration behind him can function to imply a halo, but that also clearly is part of the over make-up of the background.

At the bottom right, we see the seed that has fallen on the path and the birds who came to eat it. At the middle right, we see three very small plants that represent the seeds that "fell on the rocky ground" but which will fail because they have "no depth of soil" and "no root."

The plants among the thorns seem to be missing from the image, but another reading is possible. Perhaps the top plant on the right is the one that represents the seed that fell on rocky ground. There is a hint--barely--of other plants carved in the stone by the two plants on the lower level on the right. It is possible that those two plants are the ones that fell "among thorns" and did not produce fruit because they were "choked."

The seeds that fell on the good soil are shown on the left. They "brought forth grain" in an exceedingly fruitful way. So this image represents all the chronology of the parable from when the sower initially sowed until the great harvest.

Through this sculpture--this "sermon in stone"--the ones who have "ears to hear" is expanded to those who have "eyes to see" the "secret of the kingdom of God" (Mark 4:11; cf. 4:12, which includes a statement about "looking" but not "perceiving").