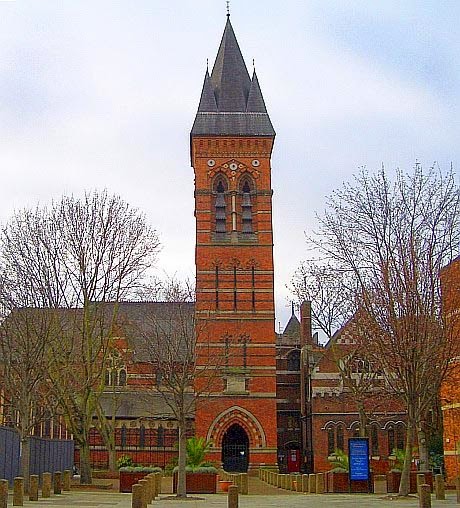 One of the things I wanted to see on my visit to London this summer was St. James the Less Church on Moreton Street (near Vauxhall Bridge Road). I had never been there before, and I wanted to see it for a couple reasons. First, there are some interesting sculptures of four of the parables on some interior columns of the church. Second, my last book was on the Reception History of the Epistle of James, and I wrote extensively about James the Less in the first chapter of the book (including many pictures of depictions of him, such as a sculpture at Salisbury Cathedral). I did that because some church traditions have (erroneously) conflated James the Less with James of Jerusalem (i.e., James the brother of Jesus).

St. James the Less was well worth the visit. I went to the church on my way to an appointment in the Prints and Drawings Room at Tate Britain to see the Millais prints of the parables that I wrote about a few weeks ago. The church is very close to the Tate, so it was convenient to stop by there on the way (both are near the Pimlico tube stop). If you wish to visit St. James the Less Church, it's a good idea to call ahead to make sure you can get inside the building. Also, if you want a nice sandwich on the way to the Tate after visiting the church, I can recommend the Relish Sandwich Shop on the corner of John Islip Street and Ponsonby Terrace (I also recommend, weather permitting, eating the sandwich on a bench on the Thames near Tate Britain).

Please see St. James the Less's website to learn more about the church. The church was built in memory of Bishop James Henry Monk (his three daughters were behind it). The church's architectural style is Victorian Gothic, and it was designed and built (1858-1861) by George Edmund Street, who also was the architect for Bristol Cathedral.

The day I was there, the church was extremely dark on the inside, and I once again regretted not bringing my good camera to England. I used my iPhone to take photos of what I needed.

Unfortunately, the church's vicar, The Revd Lis Goddard, was on a trip to the United States while I was there, so I did not get to meet her. But I am extremely grateful to Angela King, a licensed lay minister at the church, who graciously let me into the church and gave me a tour of its interior (Thank you again, Angela!). She also assisted with the photos, because she shined a flashlight ("torch" in England) on each sculpture while I tried to take its photo.

The sculptures are found on columns inside the church. Four of the sculptures depict Gospel parables, among other things. The columns were designed by W. Pearce. Here is a photo on http://salviatimosaics.blogspot.com that was taken on a day when the church interior was much brighter than when I was there!

Here are a couple photos I took of the sculpture that depicts the parable of the Barren Fig Tree. Here's one taken without a flash, but with Angela shining a flashlight on it: 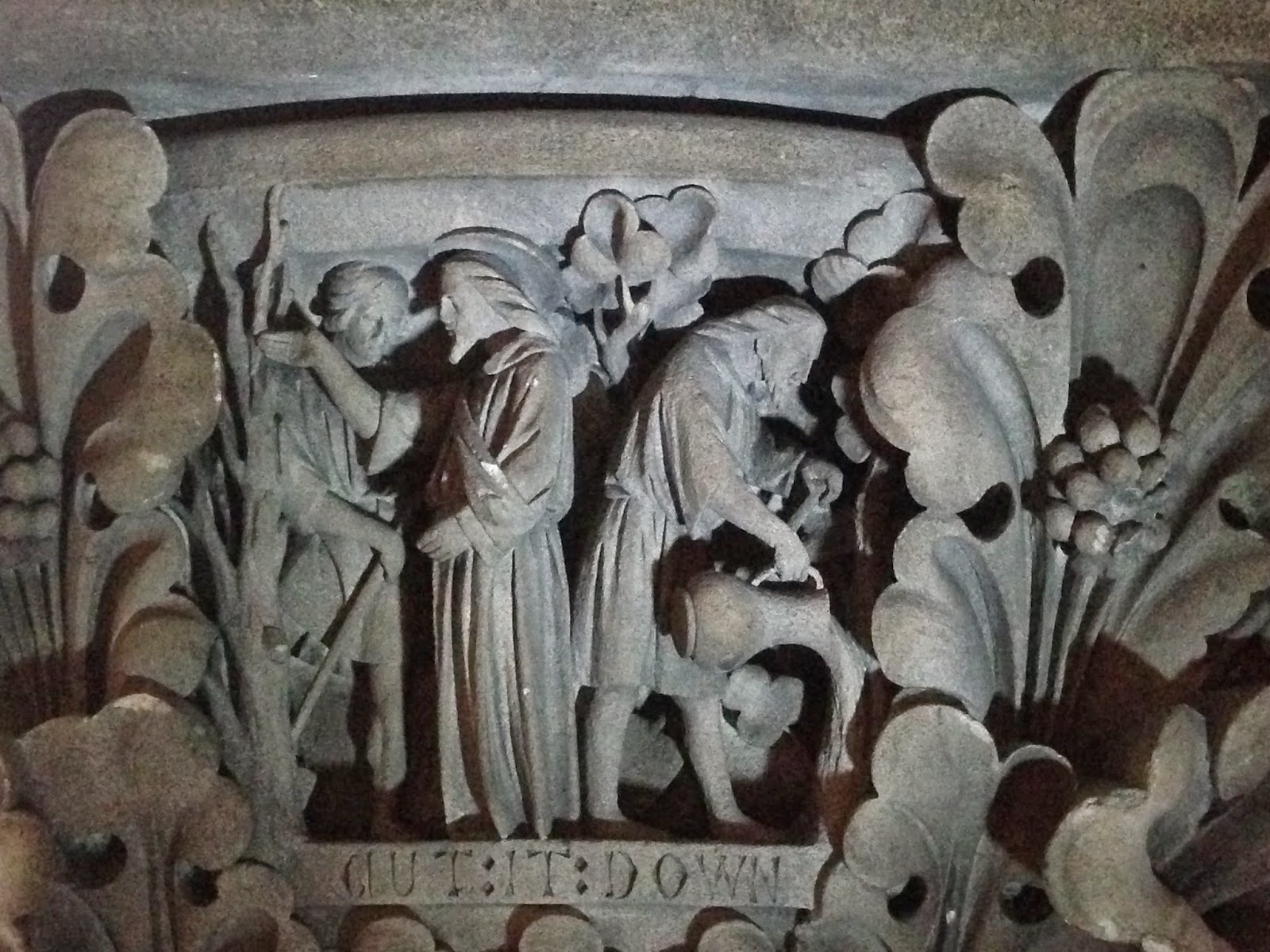 And one with a flash: 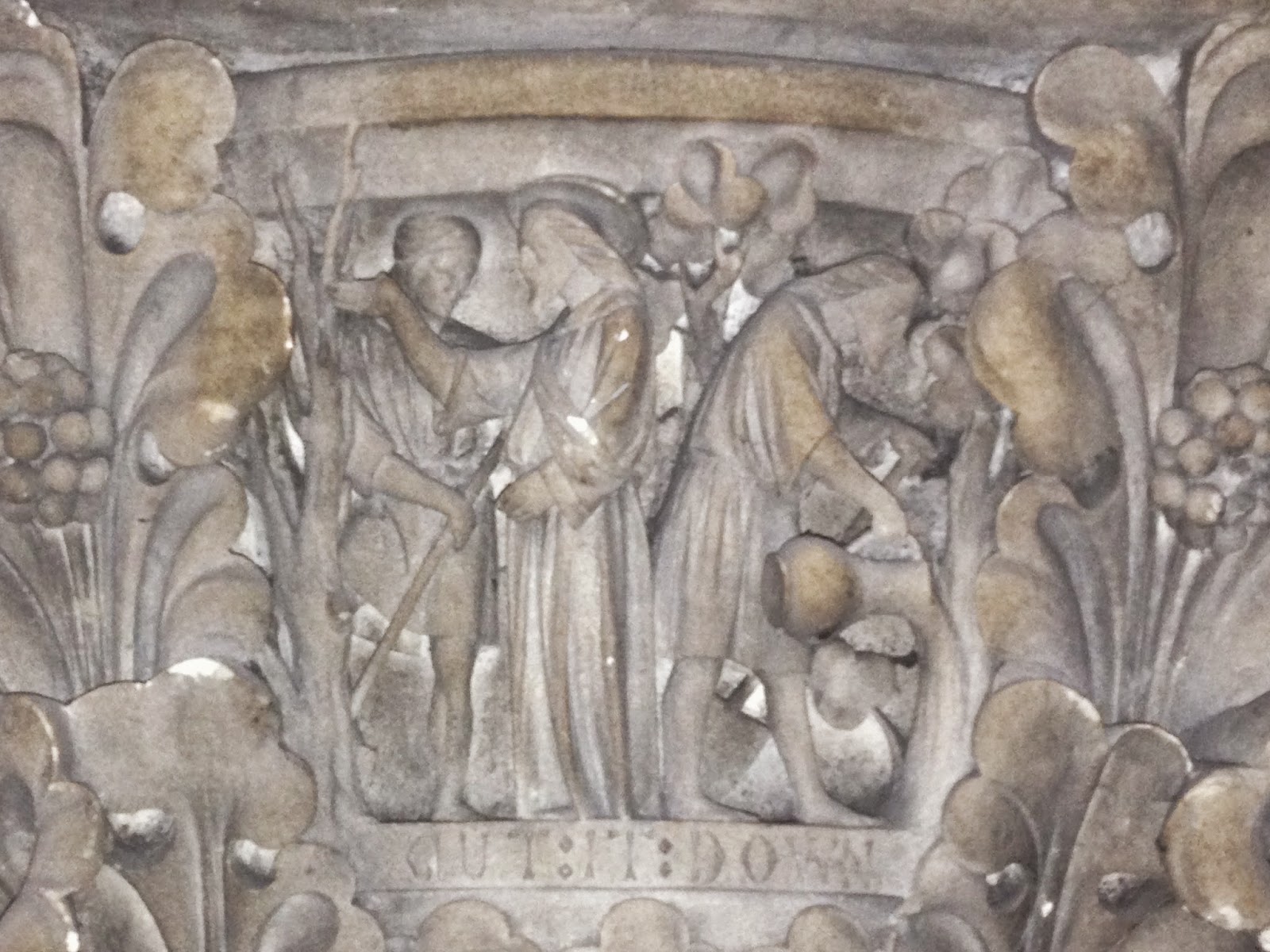 
6 Then he told this parable: “A man had a fig tree planted in his vineyard; and he came looking for fruit on it and found none. 7 So he said to the gardener, ‘See here! For three years I have come looking for fruit on this fig tree, and still I find none. Cut it down! Why should it be wasting the soil?’ 8 He replied, ‘Sir, let it alone for one more year, until I dig around it and put manure on it. 9 If it bears fruit next year, well and good; but if not, you can cut it down.’”

On the left side of the sculpture (left to right), we can see the barren fig tree, the gardener, and the man (with his left arm raised) who says "Cut it down" (those words are carved below the image).

The right side of the carving depicts the actions after the parable where the gardener continues to take care of the plant. He is holding a shovel in his left hand (the blade is shown on the ground between the gardener's legs). He is either watering the plant (less likely) or pouring manure/fertilizer on it (more likely) with a vessel in his right hand.

Many depictions of the parables, since they can function as "sermons," depict different "stages" of the narration. Other sculptures in St. James the Less Church do this as well, as we will see with the sculpture of the parable of the Sower, for example.

The earliest interpretations of this parable argue that the barren fig tree symbolizes Israel (see, for example, the Apocalypse of Peter 2), although Augustine and others interpreted it as symbolizing the whole human race. The gardener is often identified with Jesus, although this sculpture seems to identify the man who says "cut it down" with Jesus by placing a halo over his head (cf. Joachim Jeremias who notes that the gardener could signify Jesus but to the disciples the man calling for it to be cut down might indeed be Jesus; The Parables of Jesus [1972] 170-71).

The next post will discuss my photos of the parable of the Sower sculpture.