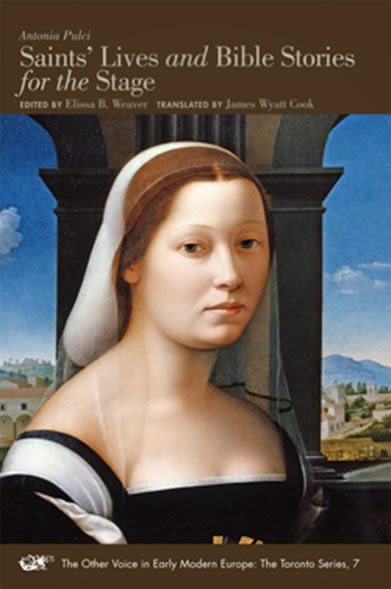 Besides being one of the four most commonly represented parables in art (along with the Good Samaritan, Rich Man and Lazarus, and the Wise and Foolish Virgins), the parable of the Prodigal Son inspired numerous plays (it even became a subgenre of English morality plays).

Antonia Pulci is the earliest known Italian woman playwright, and the first one to be published. Her play, The Prodigal Son, as an important illustration of these plays, and it represents significant developments and elaborations upon the parable as it is found in the Gospel of Luke.

Pulci was born around 1452 in Florence, Italy. Because of her family’s financial comfort, Antonia received a good religious and literary education, most likely being tutored at home, although her written works demonstrate a familiarity with books common in the Italian “abacus school” curriculum. In these schools, students learned mathematical skills—including bookkeeping—how to read a series of religious and secular works, and how to write in Italian. In addition, Pulci also shows an absolute mastery of the various forms of Italian verse (see Pulci 1996: 12-13).

Antonia married Bernardo Pulci in 1470, and she and Bernardo probably collaborated on a number of works; both wrote sacred dramas for popular performances and for publication by the newly established printing industry in Florence (Pulci 2010: 21). After Bernardo’s death in 1488, Antonia devoted herself to the religious life, becoming associated with the Augustinian order and eventually founding the convent Santa Maria della Misericordia.

Pulci wrote at least seven one-act plays that were published numerous times over the next two centuries, three of which are on biblical subjects: Joseph, David and Saul, and the parable of the Prodigal Son. The structure of her plays varies, but all of begin with a prologue narrated by an angel, which apparently serves as the voice and point of view of Antonia. An earlier Florentine play about the Prodigal Son by Piero di Mariano Muzi served as the inspiration for Pulci’s play—just as hers served as a model for a later one by Castellano Castellani—but she significantly reworks the play and makes it her own (Pulci 2010: 47-54).
at April 15, 2015