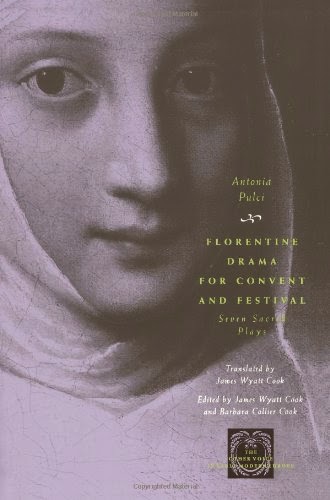 An important innovation in the narrative of the Prodigal Son parable in Pulci’s play comes immediately after the prologue: The prodigal son, before he leaves home, gambles at cards and loses a large amount of money, which immediately highlights his sinfulness and irresponsibility. It is this loss at cards that spurs the prodigal to ask his father for his inheritance. The prodigal’s self-centered focus is solely on himself and his happiness (all quotes are from Pulci 2010: 308-61):

I don’t think that beneath the moon before
Was ever found with luck like mine a man
Who of a thousand bets could not win one.
“Unfortunate” I surely can be called—
I am not paid up yet—I want to go
And ask my father for my inheritance.

Pulci believed that asceticism helped lead to a virtuous life, so she wants the audience to reject the prodigal’s early view that money brings happiness. Ironically, even after saying that he could not win one bet out of a thousand, he declares that he wants “to go away and try [his] luck” using his “great inheritance” to travel to seek earthly pleasures: people “with money travel without fear,” he says, and the world is theirs for the taking. The prodigal does not yet realize that his luck—or his ability to make wise decisions—will not improve.
Another major elaboration in Pulci’s play is that both the prodigal’s father and elder brother beg him to stay after he asks for his inheritance. His father sorrowfully exclaims:

You’ve set a grievous sorrow in my heart.
Don't let me hear you say such things again.
. . .
Consider staying here with me, sweet son,
Because near you I wish to end my life.

The father also asks his “dear son” to consider just how good his current life at home is:

You know how comfortably I’ve brought you up,
You’ve never tasted any hardship, and
You’re used to being well provided for.
Now through the world you’ll go in great distress;
Poor wretch, don't think to err in such a way,
Ah, don't let anger overcome you so.

The son continues to insist that he wants his inheritance, and the father repeatedly—in four separate speeches—states his “great love” for his son, speaks of the “great pain” the son’s leaving will cause him, and begs him to yield to his father’s “great prayers” to stay home:

Oh, don’t make me so sorrowful, my son,
Take pity on me who has brought you up;
You know that I have loved you even more
Than my own self—forever loved you thus,
Beloved son, the comfort of my heart.
Oh do not think to leave me in such woe,
Son; overcome such great hard-heartedness,
For my old age show some compassion, please.

The father’s heart-felt pleas are to no avail. The prodigal takes ten thousand ducats from his father, and, after also rejecting the pleas of his brother to stay home, he departs for a foreign land.

One quote sums up his state of mind: “Who has cash in this world has what he wants.”

In the next post, I will analyze the prodigal's arrival at the town square and his interactions with the "seven boon companions" (i.e., the seven deadly sins) that he immediately encounters there.