Unlike scenes from the infancy narratives, the passion narratives, and miracles in the Gospels, depictions of the parables of Jesus rarely appear in early Christian art. One of the first and most common images used by Christians is the popular Greco-Roman image of the ram bearer (Greek kriophoros; κριοφόρος). This image can be traced back to 1000 BCE in reliefs at Carchemish, where it symbolizes an animal about to be sacrificed (Milburn 1988: 30). When the image appears in Greco-Roman environments, however, it can represent such things as philanthropy, the happiness of rural life (Rutgers 2000: 89-90), or an allusion to paradise in the afterlife (Spier 2007: 6). This latter meaning was often conveyed by portraying Hermes, god of compassion and guide to the underworld, as symbolic of the hope for a blessed afterlife and more generally of compassion or sympathy (Milburn 1988: 30). In the late second or early third century, Christians began to use this image, since the Gospel of John represents Jesus as the good shepherd who lays down his life for his sheep (10:11-16; cf. Ezek. 34:1-4; as Tertullian notes, the sheep is the Christian, the flock represents the people in the church, and Jesus is the good shepherd; On Modesty 7; “whom you depict on a chalice,” On Modesty 10). That figurative language in John is usually not considered a true parable, but the image of the ram-bearer also came to represent the parable of the Lost Sheep in Luke 15:3-7, where the shepherd goes out to find and bring back one lost sheep out of the hundred in his flock.

I will look at the image in some Roman catacombs in my next post, but one early example of the Christian use of the image of the Good Shepherd is found in an early third-century fresco in the house church at Dura-Europos. Dura-Europos is an ancient city on the south bank of the Euphrates River in eastern Syria (about 25 miles from the border with Iraq). The military outpost in the eastern border of the empire (Limes Arabicus) was in Romans hands from 156 CE, when they took it from the Parthians, to 265 CE, when it was abandoned after being captured by the Sasanians. Among the important archaeological discoveries at Dura-Europos, beginning in the 1920s, are a fragment of Tatian’s Diatessaron (fourteen fragmentary lines with words from all four canonical Gospels), paintings in the Temple of Palmyrene Gods, a Mithra temple in the Roman camp, and an astonishing third-century Jewish synagogue whose four walls were covered with paintings with images from the Hebrew Bible, and a Christian house church with images on the walls of its baptistery. 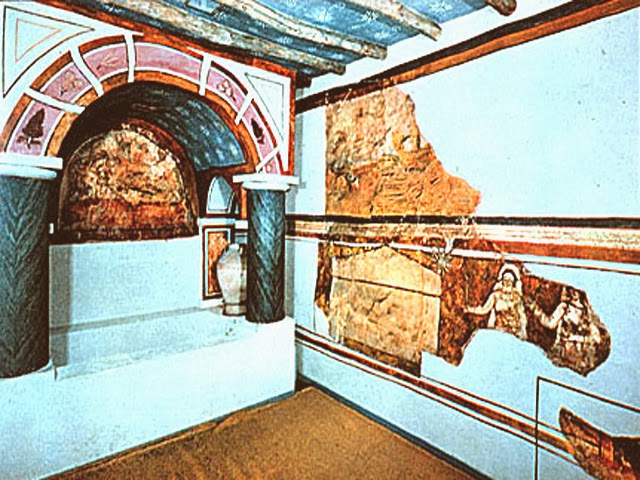 The early date of the Christian images make them unique, since they are in a place of worship and baptism, instead of in a tomb. The baptistery is one rectangular room of the house (which consists of eight rooms, another of which was a meeting or assembly room for worship) with a wooden roof. Portions of frescoes line the walls, including images of Jesus healing the paralytic, the Samaritan woman at the well, the three women/Marys at the tomb of Jesus, Jesus and Peter walking on the water, and, from the Hebrew Bible, David and Goliath. On the west wall of the baptistery is a decorated curved arch, resting on decorated pillars. On the wall behind/within the arch and over the baptismal font is a painting of the Good Shepherd that follows the curved outline of the arch. On a red background, the Good Shepherd carries a rather large (in proportion) sheep on his shoulders, and a number of his flock walk before him. A representation of Adam and Eve, much smaller in size, is in the bottom left of the painting. Both Adam and Eve holding something (a fig leaf?) before their naked bodies. An image of a coiled serpent is barely visible beneath them. 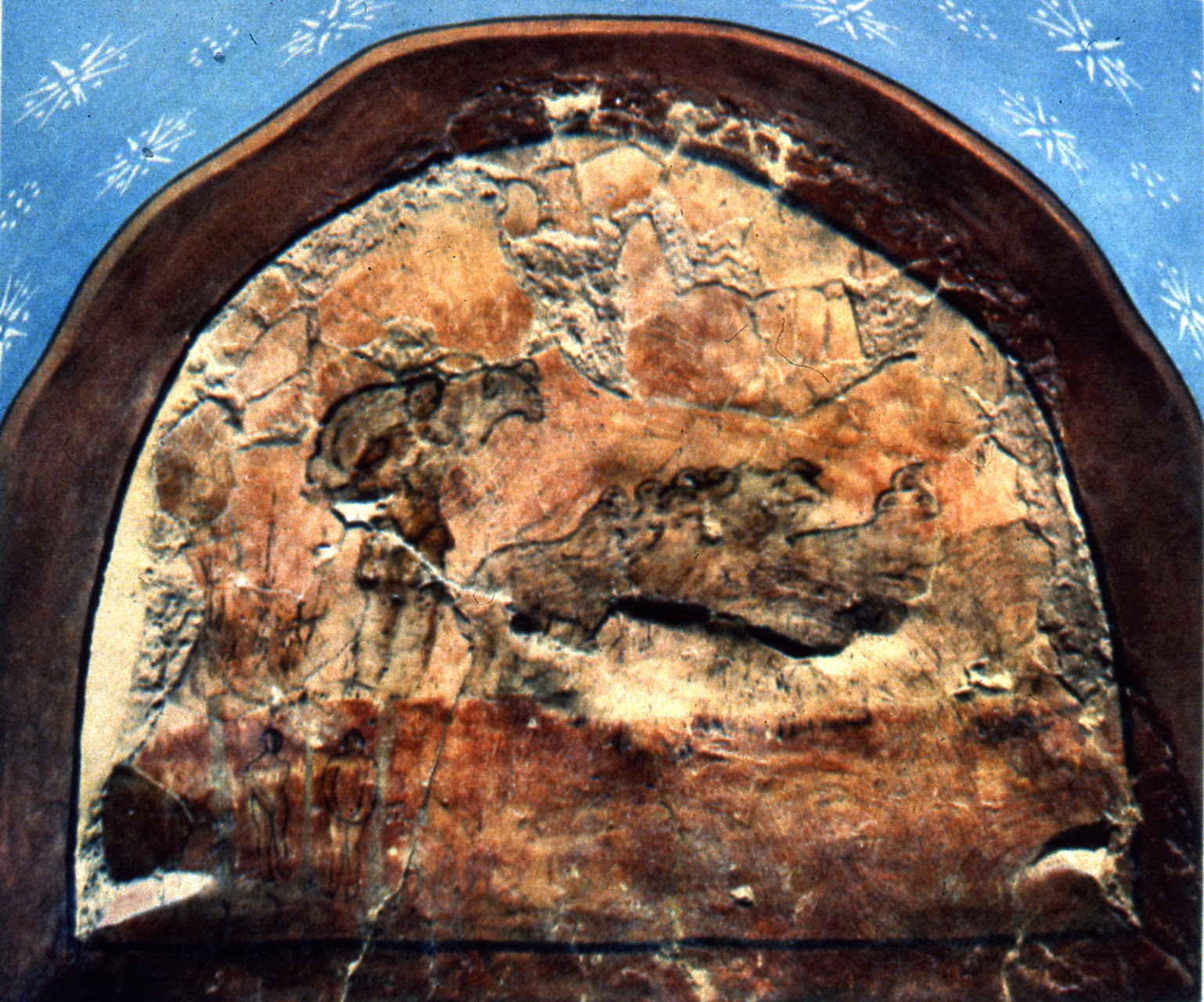 Obviously the juxtaposition of these two images makes a statement about the sins of human beings and the forgiveness of those sins signified through Christian baptism. The aptness of the shepherd imagery is also reinforced by such Hebrew Bible passages as Psalm 23, including Jesus as Lord being “my shepherd,” the baptismal waters as the “still waters,” the “prepared table” and the “cup” prefiguring the Eucharist, and the imagery of dying/rising with Christ being associated with baptism and the forgiveness of sins (see Jensen 2000: 39).

For Further Reading
André Grabar, Early Christian Art
Clark Hopkins, The Discovery of Dura-Europos.
(Other references upon request)
at January 20, 2014