Whether it’s parables or paintings, studying such “intertexts” (e.g., comparative texts, cultural contexts, etc.)—although often clarifying interpretations—sometimes can give evidence for varying interpretations. Some aspects of interpretation will be forever shrouded in mystery. Often such ambiguity is intentional. That is part of the power of parables/paintings and one way they engage us more deeply. 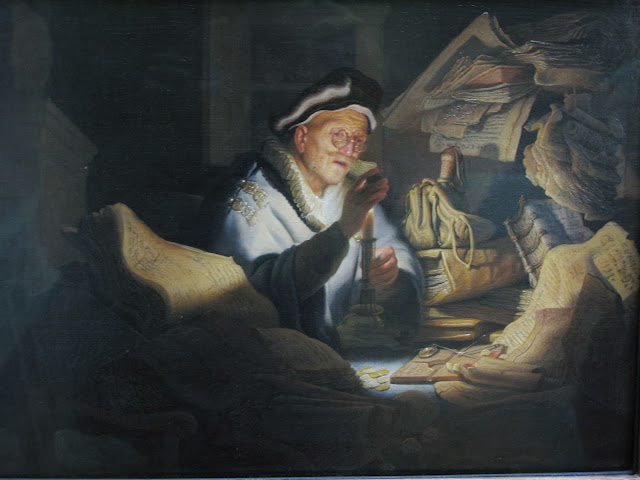 Christian Tümpel argues that this painting is Rembrandt’s representation of the Rich Fool in Luke 12:16-20. To make his case, Tümpel utilizes “intertextual” arguments from the iconography used in depictions of the parable in works prior to Rembrandt’s, such as Hans Holbein’s Der Rych man. 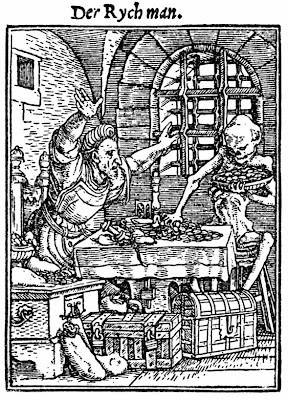 Holbein’s work portrays death as a skeleton stealing the rich man’s coins from a table as the man raises his arms in protest. Other iconographical elements are also included, such as a clock and a money chest (Tümpel, “Ikonografische Beiträge zu Rembrandt”).*

Tümpel says that because of Rembrandt’s use of chiaroscuro, he was able to paint interior “history scenes” that took place inside buildings—scenes his predecessors had often avoided—because he could use different light sources to assist in interpreting the scene. Tümpel then argues that this painting is a biblical history scene, not, as it had been interpreted before, a “genre painting,” paintings that look like they are depictions of scenes from everyday life but instead seek to impart a deeper meaning or moral. Rembrandt forsakes common iconographical elements from earlier paintings (e.g., a skeleton symbolizing death or the building of barns in the background) and focuses on the rich man surrounded and absorbed by the material aspects of this world.

Thus, the money, books, purse, scale, and papers are not just symbols of commerce or usury, Tümpel argues; they are also symbols of the transience of earthly goods. Rembrandt thus portrays the man studiously examining a coin to depict his dependence on transitory earthly possessions. The Hebrew-like letters found on various papers scattered on the desk represent a biblical theme or scene—Rembrandt sometimes used Hebrew or Hebrew-like lettering to lend scenes biblical color. Therefore, in Tümpel’s view, Rembrandt is the first artist to capture the heart of the parable without using allegorical elements or additions that go against the reading of the parable.

I agree that Rembrandt sometimes does seem to connect genre scenes with biblical narratives, such as his 1628 painting, Two Old Men Disputing, which some argue portrays Peter and Paul as scholars debating aspects of scripture interpretation (see Shelley Perlove and Larry Silver, Rembrandt’s Faith). 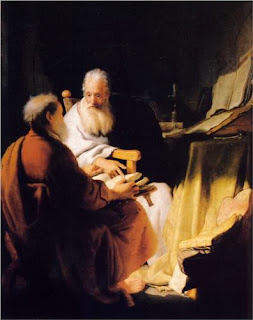 Another possible argument against Tümpel’s position is that if Rembrandt did make these iconographical changes, they did not have much affect on other works of art: the iconography after Rembrandt remains unchanged for centuries as the rich man/miser is portrayed in work after work. For example: Vogtherr (1544), Scharffenberg (1576), Kieser (1617), Valvasor (1682), Mechel (1780), Bewick (1789), Anderson (1810), Douce (1833). You can see those works and others here:

Just like with the comparative texts used by parable scholars, other “intertextual” connections argue against Tümpel’s position and for another interpretation. For example, the man inspecting the coin in Rembrandt’s painting is reminiscent of an earlier Honthorst painting, An Old Woman inspecting a Coin (~1623/4). 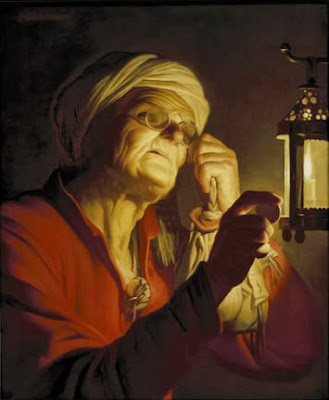 Rembrandt substitutes an old man for Honthorst’s elderly woman, but the resemblances are striking—an elderly person in a dark room, wearing a pince-nez, holding a coin with a right hand, and examining it in the light of a single candle. 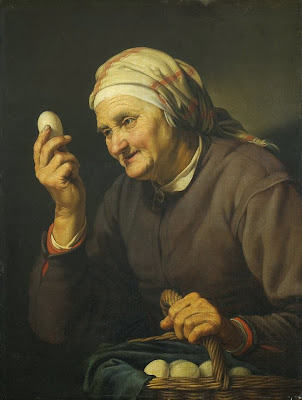 or Matthias Stom who, among others, paints a woman counting coins on a table at night. 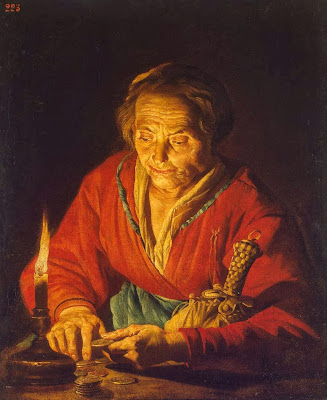 These paintings and similar works by other artists seem to use this scene to personify avarice, with an elderly person as an example of someone who should have better things to do than to count and appraise his/her wealth (see Gary Schwartz, Rembrandt: His Life, his Paintings).

Take, for example, Roelof van Straten’s arguments about Rembrandt’s painting, which he calls by a more traditional title, The Old Usurer. The Hebrew letters on the documents make clear the man’s Jewishness. The man is comfortable (financially as well, according to van Strafen, since he lends money at “exorbitant interest”) near a warm stove on a dark night. Van Strafen argues that there is no convincing evidence that this painting depicts the Rich Fool in Luke 12:13-21. The comparison with the Honthorst painting indicates that this Rembrandt is indeed a genre painting that depicts avarice (Young Rembrandt).

Likewise, Bob van den Boogert argues that Tümpel has misread the painting. Depictions of the Rich Fool usually portray a middle-aged man in expensive clothes surrounded by treasures, as well as the requisite skeleton holding an hourglass. Rembrandt includes “books, promissory notes, gold coins, and moneybags,” which are undoubtedly symbols of “Vanitas,” but there is no symbol of death—other than the man’s age. Van den Boogert also declares that what Tümpel envisions as a clock symbolizing the man’s approaching death actually is a rectangular stovepipe (“An Old Usurer Examining a Coin”). My reading of the painting (in person in the Gemäldegalerie in Berlin) is that the shadows in the painting make a definitive answer impossible. There does appear to be a circular figure on the rectangle, but in the shadows of this painting, many things are possible.

Even the Hebrew-like script does not necessarily portend a biblical scene; it more likely, based on intertextual evidence, designates a Jewish usurer. As van den Boogert argues, “in the 17th century Jews were generally associated with speculation and money-trading,” which led to stereotypical depictions of the “Jewish usurer.” Van den Boogert also notes the similarities of this painting with those of usurers and tax collectors by Quinten Metsijs 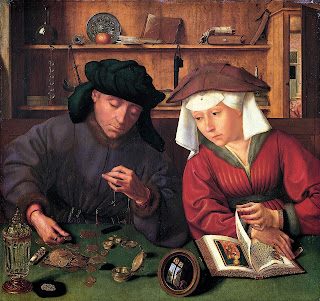 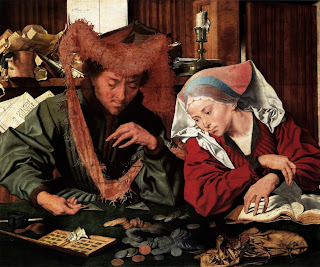 As Perlove and Silver observe, Rembrandt’s early works depict Jews as general types, including “demonic caricatures of Jews as fanatical persecutors of Christ.” For example, in Rembrandt’s The Stoning of Saint Stephen (1625)— itself notable for the first self-portrait of Rembrandt—the Jews on Stephen’s left are harsh caricatures (Rembrandt’s Faith). 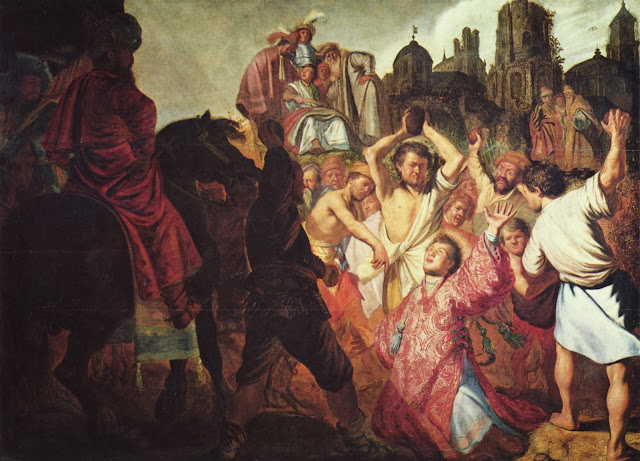 (Rembrandt's face is just above the kneeling Stephen's face)

Van den Boogert thus argues that Rembrandt likely paints this elderly man not as the Rich Fool in the parable but as a stereotypical Jewish usurer who portrays avarice.

The evidence thus seems to lean against Tümpel’s position, but it is not definitive. Rembrandt clearly wants us to focus on the elderly man. He illuminates the man’s face and mutes elements in the background, so the man draws our attention, much like an actor on a stage under a sole spotlight. As Joseph Netto notes about Rembrandt’s portraits in general, the

result is that the portraits appear to offer us a glimpse into the mind of Rembrandt’s figures, even though the contents of their thinking remain shrouded in shadow. Thus the psychological depth opened up by Rembrandt’s chiaroscuro is seemingly bottomless. That is, we get a strong sense of something serious going on in the mind of these figures, but the precise nature of their thoughts and feelings is, at best, only darkly implied.”

Sometimes there is a clear answer in interpretation; sometimes there is not; sometimes one answer is more likely, based on the evidence; sometimes it’s an even bet. What Gerd Theissen once noted about historians is also true for exegeses of many texts/paintings: “For what is historical scholarship, if not an ongoing conversation about the past in which no one has the last word.”

Let me close with the final paragraph of my article:

Chiaroscuro, for Rembrandt, is not only a dramatic means of portraying a scene, but also an effective way of suggesting inner character with psychological insight subtly portrayed with a sense of mystery. The rays of light are reflected in various ways and sundry places, just as parables are reflected in different ways in different contexts and heard in numerous ways by various hearers. Rembrandt illuminates some objects clearly, while other aspects remain murky or obscure, placed deliberately in the shadows, creating uncertainties and provoking debates. In a similar way, the parables of Jesus illuminate some things as clear as day; other aspects become clearer as we learn more and more about the first-century contexts in which Jesus created and his followers preserved, transmitted, and transformed his words; whereas still other elements—because of the nature of the parabolic word—remain deliberately in the shadows, provoking our responses as we endeavor to construct ideological bridges to try to understand Jesus’ parables more clearly in his context and ours.

*Full data for all references may be found in my published article, or I can send them to you upon request.
at January 02, 2014