The Good Samaritan window continues its rendition of the Creation story so that the allegorical connections of the parable to fallen humanity can be more fully understood.

Adam and Eve, after their sin, clothe themselves and attempt to hide from God. God, however--still portrayed as Jesus the true Good Samaritan--finds them hiding behind some plants: 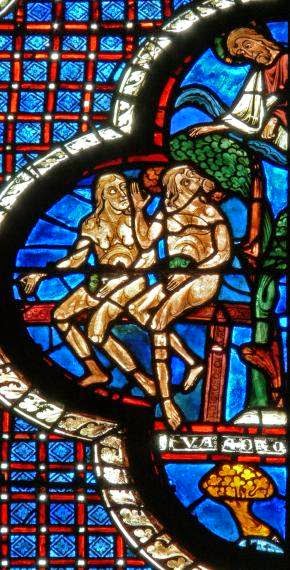 Because of their sin, Adam and Eve are expelled from Paradise, forced out through a red door by an angel brandishing a sword. The serpent is nowhere to be seen, although a tree with red fruit is visible just behind the angel, which most likely represents the tree of life that God is concerned that Adam and Eve might eat and therefore live forever:

Gen 3:22-24: Then the Lord God said, ‘See, the man has become like one of us, knowing good and evil; and now, he might reach out his hand and take also from the tree of life, and eat, and live for ever’— therefore the LordGod sent him forth from the garden of Eden, to till the ground from which he was taken. He drove out the man; and at the east of the garden of Eden he placed the cherubim, and a sword flaming and turning to guard the way to the tree of life.

Jesus, the Good Samaritan, will later be the one to give fallen humanity the chance at eternal life 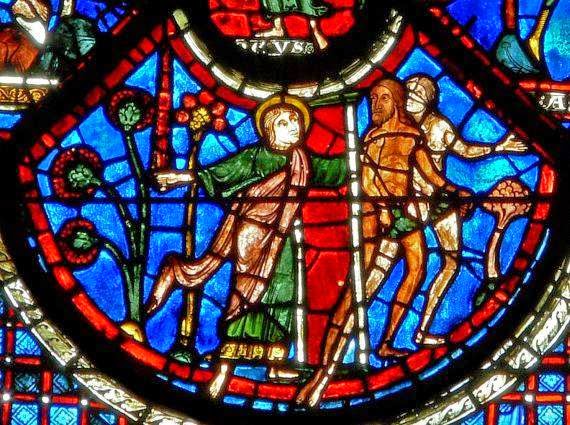 The next scene depicts some of the punishments that Adam and Eve face in Genesis 3. Adam tills the soil and Eve spins (not mentioned in Genesis). They wear the clothes that God made for them (Gen 3:21): 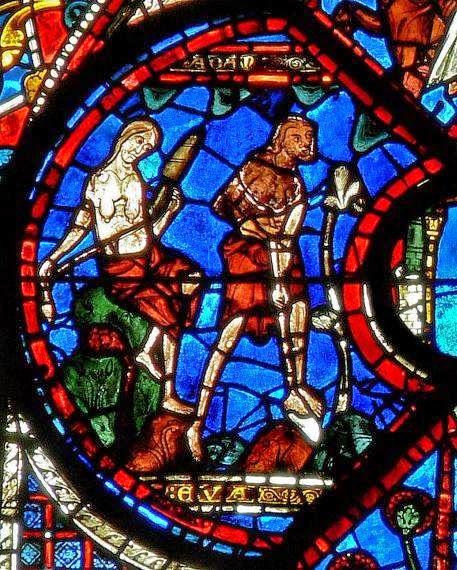