Chartres Cathedral (#6): The Priest and Levite pass by the Man 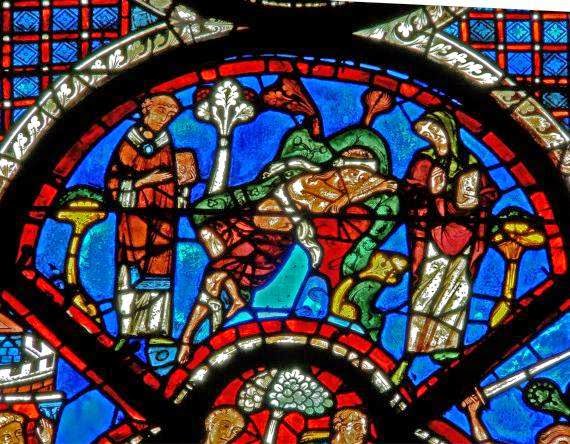 The man is obviously in distress, and his eyes are open. He is also clearly not dead, so the issue of uncleanness is a moot point (in reality, it probably would have been anyway). Note also that both are carrying books (of the law). Whether it is simply a means of identification or a commentary on why they passed by is unclear.

As I noted previously in the posts on Rembrandt and the parable of the Rich Fool (late December and early January), there are striking similarities between textual and visual exegesis. Both parables and works of art, for example, can be strikingly dialogic, ultimately urging readers/viewers to get involved, to respond, to "answer."


Mikhail Bakhtin insists that art also includes moral obligation: One of his major works, Art and Answerability (1919), begins with the words, “I have to answer with my own life for what I have experienced and understood in art, so that everything I have experienced and understood would not remain ineffectual in my life” (Bakhtin 1990: 1). Bakhtin thus argues that art, like life, involves a moral obligation to “answer” concretely, to respond, and to interact with others and with the world. Such responsiveness is a key element of artistic creativity and the ethical responses of interpreters.

In addition, as W. J. T. Mitchell notes concerning images of all kinds: “The question to ask of pictures from the standpoint of poetics is not just what they mean or what they do but what they want­—what claim they make upon us, and how we are to respond” (2005: xv).

That is exactly the sentiment stated by parables scholars for many years. As I wrote in my own book on the parables years ago:

. . . parables in their polyvalency to an extent foresee and anticipate our responses; Jesus created them with one ear already attuned to our answers. Parables, therefore, are profoundly dialogic and do not pretend to be the last word because, in parable, the last word is continually granted to others . . . (WATSA Parables? 2000: 103).

The open-endedness of the parable of the Good Samaritan is not just at the end, when the lawyer is asked "who proved to be a neighbor?" It starts at the very beginning: We do not know the identity of the man traveling down the road from Jerusalem to Jericho. In fact, at first we don't even know whether the person is female or male. It is a "certain human being" (anthropos). It could have been anyone, including you or me.

That open-endedness continues with the incredible words that it was "by chance" that a priest walked by. The parable is not giving us the illusion that there must be a happy ending or that God or God's kingdom is at work, when the next event happens "by chance." Once again, anyone could have passed by, including you or me.

And, as most interpreters point out, we are not told explicitly why the priest and the Levite passed by, although the parable later gives a hint that it was because of their lack of compassion (10:33).

I should also note that although both parables and visual art have a similar sense of open-endedness, they have to make different choices (e.g., the stained-glass window was to give the man a certain identity from the very first). Visual art has to make certain decisions about how to portray things that can be left open-ended by words, and vice versa. The open-endedness often occurs in different ways.
at June 02, 2014