The next scene in the window shows the Samaritan taking care of the wounded man at the inn. The man lies in bed while the Samaritan ministers to him: 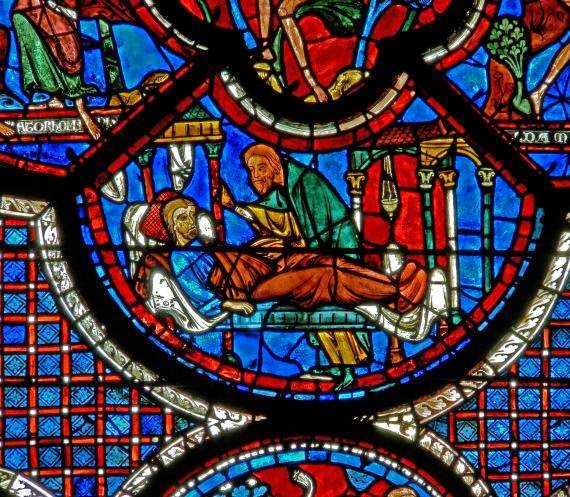 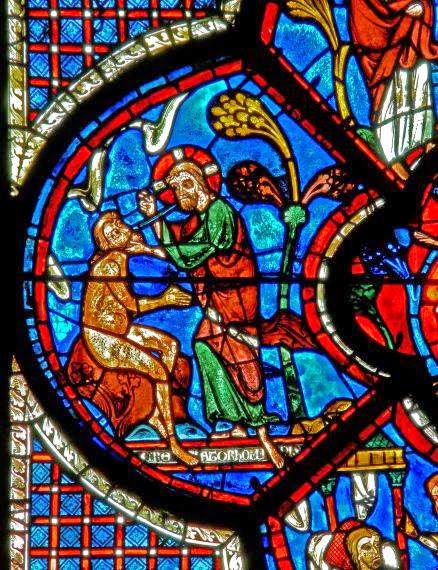 God has a cross nimbus and looks in other respects just like the Samaritan/Jesus.

One of the interesting aspects of this stained glass window, therefore, is the way it theologically and physically integrates the parable with the story of Adam and Eve. Not only do they inhabit the same window, but, in addition, the last scene of the parable depicted in the window (i.e., the Samaritan taking care of the wounded man) is found in the same “medallion cluster” that begins the story of Adam and Eve--you can see at the bottom right of the above picture part of the scene of the Samaritan/Jesus taking care of the wounded/sinful man. The two stories are theologically yoked. In this way, viewers understand how Jesus, as the true Good Samaritan, restores fallen humanity to a right relationship with God.

On a personal note, it's good to be back in the UK and enjoying the company of good friends. I'm staying this time in Regent's Park College of Oxford University, where Emory University holds its summer program, and the hospitality is wonderful. Emory's program doesn't start for a few weeks, but Regent's made room for me during an exceedingly busy time. Haven't seen the famous tortoise yet this year. I'll be here for a week before heading off to Cambridge and then London.
at June 11, 2014