Chartres Cathedral (#7): The Samaritan has Compassion

Luke 10:33-34: "But a Samaritan while travelling came near him; and when he saw him, he was moved with pity. He went to him and bandaged his wounds, having poured oil and wine on them. Then he put him on his own animal, brought him to an inn, and took care of him." 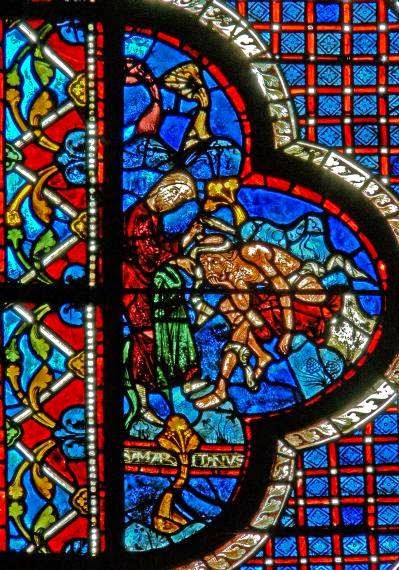 This section is the first of four scenes about the actions of the Samaritan who has compassion on the wounded man. Here the Samaritan sees the man, stops, and is binding the wounds on the man's head. The man already has bandages on his leg and torso. Note the Samaritan's appearance: Although there is no halo/cross nimbus, the Samaritan clearly resembles Jesus, which follows the allegorical interpretations of the parable (see previous posts for details): The Good Samaritan is Jesus; the man symbolizes fallen humanity. 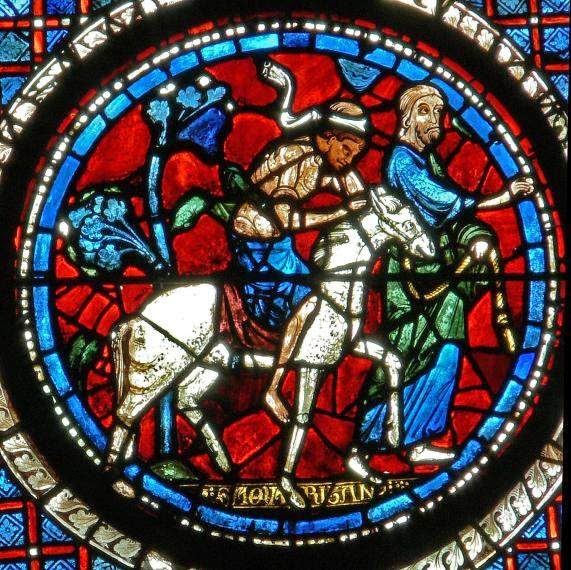 The next scene portrays the Samaritan (i.e., Jesus), having placed the wounded man on his animal, leading him to the inn. Once again, note the inconsistency between scenes in the window. Here the Samaritan is dressed in blue and green; in the last scene his clothes were red and green. Likewise the wounded man here is (half)dressed in blue, whereas in the previous scene it was red. The bandage is clearly seen on his head but not around his torso.

Notice how the Samaritan/Jesus has his arm outstretched. It is hard to see, but he has coins in his hand, and this action connects the scene to the next scene in the window, immediately to the right: 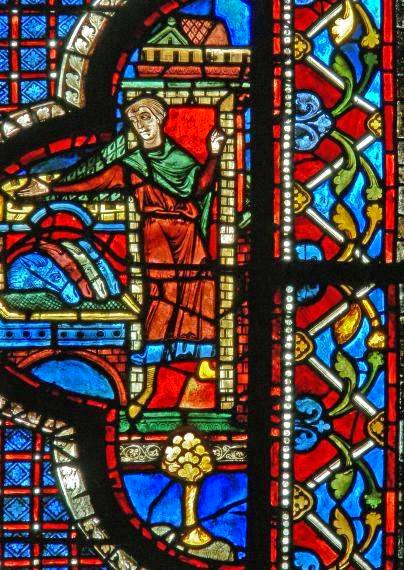 The Samaritan/Jesus is paying the innkeeper money to keep the wounded man at the inn (there are four horses depicted in his stable, depicted just below his outstretched right arm). In effect, Jesus pays the price for the salvation of sinful humanity in this "luminous sermon" (Stokstad/Cothran)
at June 07, 2014